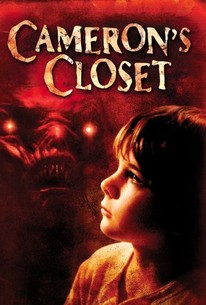 Director Armand Mastroianni's last horror feature before building a more solid reputation as a director of TV movies and series, Cameron's Closet tells the tale of a bright young boy with innate telekinetic powers whose gifts were exploited by his father (Tab Hunter) in a series of controlled experiments. After his father's grisly death, Cameron's powers seem to have abated -- but as any horror aficionado can predict, they have increased exponentially, opening a gateway in the title walk-in for a powerful demon to emerge. The usual band of paranormal experts (including the oddly-cast Chuck McCann) arrive to do battle with the closeted beast and are dealt with in the usual gory ways, until it becomes apparent that only Cameron himself is psychically equipped to deal with the demon one-on-one. What might have been a taut supernatural thriller with good performances is undone by its crude treatment of Carlo Rambaldi's makeup-effects: the lurking demon -- which at one point is merely pulled along on a dolly -- ends up resembling a guy in a dime-store Batman costume. ~ Cavett Binion, Rovi

Raymond Patterson
as Physician
View All

There are no featured audience reviews yet. Click the link below to see what others say about Cameron's Closet!