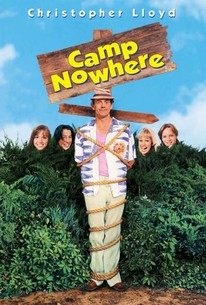 This light-hearted comedy depicts a typical summer camp, but with a special twist: this camp was designed by the campers themselves! "Mud" Himmel is a nerd. Once again he is faced with attending computer camp. His buddy Zack will be marching into go to military camp while Trish is acting happy about theater camp. That Gaby is going again to fat camp weighs heavily upon her mind. None of them are thrilled with their camp prospects and it is rebellious Mud who suggest that they create their own, secret camp. Enter Dennis Van Welker, their crazy high school drama instructor. He offers to join the conspiracy and act as their camp counselor. Just as it looks as if the four misfits are going to have a really great summer together, two dozen of their peers find out about the camp and decide to come along. For a time it's one big chaotic party. But as the kids act out their camp fantasies, they are gaining valuable insight into their lives.

A truly interesting situation which the filmmakers generally leave wilting in the sun.

No kid is going to buy into a movie that revolves around a geek who isn't a geek and a fat girl who isn't fat.

It's sweet, likable and even vaguely hip.

Elements were in place for a fun time here, but it just didn't happen...

A silly kids movie that should have gone straight to video.

As lovably "kooky" as Christopher Lloyd may be ... he can't do much on his own.

Innocent fun and should appeal to the pre-teen audience.

Mediocre Comedy that relies on a predictable, over done formula and boasts a lame cast, a poorly written script, and offers no effective comedy. The film is a poor attempt at making an entertaining feature, and there is no redeeming factor in the story. I found Camp Nowhere to be tiresome and a waste of time. This is a bland affair that doesn't offer anything of note. Christopher Lloyd has made far better films. Camp Nowhere might have worked with a better script, but it just fails. Camp Nowhere is mediocre, and the film started off quite amusing, but it just ended flat. By the time the credits roll, you feel like you wanted more out of the film, and it's a movie that could have been done much better. The comedic material is just stale, and overall it's a flawed comedy that doesn't deliver any laughs. If you're going into this film expecting something good, you'll sadly be disappointed. This film offers nothing of note. Camp Nowhere is just a collection of dull ideas, poor performances, and poor direction. The material is mediocre, but the execution feels rushed and poor. There seems not to have been any effort in making a coherent, funny and entertaining comedy. Camp Nowhere feels rushed, and it is a clichéd film that just leaves you wanting more out of the film. Like I said, Christopher Lloyd has made better films, and here he's just wasted on an underdeveloped film that is laugh free and has a boring cast of actors. Don't watch this film if you want an entertaining and funny comedy; Camp Nowhere is a mediocre outing that leaves a lot to be desired.

For anyone who ever had to attend some sort of summer camp as a youth, you might find something to enjoy with this light heart comedic fantasy. Nerdy Morris "Mud" Himmel is not enthused about the prospect of having to spend the summer at a boring, generic computer camp. His friends are equally as unenthusiastic about being sent to their special summer camps as well, which include a theater camp, military camp, and fat camp. Things take a turn for the awesome though when Mud gets the idea to create their own, secret camp. To pull this off, they enlist the help of crazy high school drama teacher Dennis Van Welker who acts as mentor and camp counselor when they create the camp of their dreams at a former hippie commune. It's the ultimate summer fantasy come to life. There are basically no rules (save for not getting caught), and, best of all, no adults are in charge, save for maybe Dennis, but even he only marginally counts as an adult authority figure type. Things start off great like you might expect, with the kids going totally wild. Of course, reality does set in, and the kids must come to terms with life, and, whether they like it or not, their coming of age might be fun, but it won't be without tough times and valuable life lessons. This is a fun movie, and I really loved it as a kid. Back then though, I wasn't viewing movies through the lens of both enjoyment and artistic merit. As such, this movie isn't as great as I remember, and is indeed, really formulaic and predictable. But it's still a lot of fun though, and can be enjoyed even more when looked at through the lens of 90s kitsch, of which this film is overflowing. The acting is pretty typical of kid's movie (by and large), but it's not the worst thing in the world either. Plus, they managed to get a really notable cast of adult actors, including Christopher Lloyd as Van Welker, Thomas F. Wilson as a lawman, M. Emmett Walsh as a different lawman, Wendy Makkena (the shy nun from the Sister Act movies), Star Trek alums Kate Mulgrew and Jonathan Frakes as parents of some of the kids, and, in a brief cameo, Burgess Meredith as an old hippie who instills his ideas of freedom into Mud. The cast is there, the concept is there, so had the script and the acting also been a little better, then yeah, this could conceivably been a fondly remembered cult classic instead of a slightly above average youth romp. Look, I like this movie, but will admit that it's really not all that special. It's a lot of fun, and certainly not boring, but there are far better kid oriented films of the 90s that stick to the ribs better than this one. It's still a noble effort, though.

This is what youth is all about, some people like Goonies but I like this one better. Its just very cool and clean

A cheaply made harmless summer camp comedy for kids. It has a few laughs.