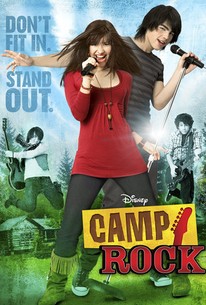 Critics Consensus: Camp Rock wants to be the next High School Musical, but its forgettable songs and dull premise hold it back.

Critics Consensus: Camp Rock wants to be the next High School Musical, but its forgettable songs and dull premise hold it back.

Critic Consensus: Camp Rock wants to be the next High School Musical, but its forgettable songs and dull premise hold it back.

The Jonas Brothers star in this Disney Channel Original Movie about a working class girl determined to refine her musical talent at an acclaimed summer workshop, and the newfound sense of confidence she gains after meeting the singer of a popular musical act. Camp Rock is the place where young musicians go to grow into talented musicians. Mitchie Torres has always dreamt of spending a summer at Camp Rock, but her family can't afford the tuition costs. When Mitchie's mother announces that she got her daughter a discount on tuition by agreeing to work as the camp cook, the young musician is overjoyed at the prospect of actually attending Camp Rock. Though at first intimidated by the more privileged campers, Mitchie soon strikes up a friendship with the decidedly down-to-earth Caitlyn, who dreams of some day becoming a music producer. Later, Mitchie tries to impress popular girls Tess, Peggy, and Ella by claiming that her mother is a powerful executive at Hot Tunes TV, a tall tale that ultimately gets her invited to sing back up for the catty clique. Meanwhile, Connect 3's summer tour has been cancelled, and lead singer Shane Gray seems to have lost his passion for music. His bandmates Jason and Nate think that a stint in Camp Rock would be the perfect thing to help the singer get his ego back in check, and soon after arriving Shane is captivated by Mitchie's voice. Unlike the other campers, Mitchie seems to genuinely appreciate Shane's creativity rather than simply fawning over his stardom, and it before long the pair has become fast friends. But Tess is jealous of Mitchie and Shane's budding friendship, and upon discovering the truth about the humble singer's mother, the scheming mean girl makes it her mission to get ensure that neither Mitchie nor Caitlyn perform at the upcoming Final Jam competition. Later, as Shane, Nate, and Jason take their seats on the judge's panel for the Final Jam, Mitchie attempts to overcome her fear, step into the spotlight, and show everyone her true talent.

Camp Rock is the kind of confection that requires copious brushing and flossing immediately afterward, but given Disney's track record, that won't dissuade four out of five girls with Jonas Brothers fever from sinking their teeth right in.

There are plenty of sound messages about the importance of honesty and not being ashamed of who you are, but it's nothing that anybody hasn't seen a dozen times before.

It's really a great movie, like a modern-day version of an old Judy Garland-Mickey Rooney picture in which the kids put on a show that improves the lives of all who see it.

Director Matthew Diamond gets a solid enough performance and lots of toothy smiles from [Demi] Lovato.

This is a hit and has been carefully crafted by Disney to become one.

I love TV. But Camp Rock is TV in the worst way -- small in concept, small in execution.

It's all breezily forgettable, though Lovato's smiley heroine is at least endearing.

Demi Lovato has all the requirements for Disney stardom, but she doesn't really act so much as walk through this movie, stopping occasionally to flash a larger than life smile.

Camp Rock is not all that good. It doesn't have the earnest, smart silliness of the High School Musical franchise.

The Disney tween machine continues to plug along mixing sugar-pop ballads with the simple structure of summer camp in Camp Rock. The familiarity makes for something comfortable, nothing spectacular, but mindlessly enjoyable.

So Disney comes up with another plan to get tweens into musicals following the massive success of the "High School Musical" movies. They come up with "Camp Rock", a film about kids trying to get into the world of fame in a popular music camp. When we first heard of the film, I knew it wasn't going to be as good as HSM but I found it entertaining. Demi Lovato's performance as Mitchie Torres was good. Her character was believable due to her performance. The Jonas Brothers also prove to be good actors as well. But we really have to give props to Meaghan Martins' performance of Tess Tyler. Snotty, mean, and believable. A lot of you Rotten Tomatoes members are dissing because it is predicatable. Well it is. There are the typical tween movie cliches but you probably won't catch them. The songs are good and toe-tapping. You'll get them stuck in your head for weeks! Camp Rock is good family fun. It may have "tween" written all over it but it can be found entertaining depending on your mood. "Whatever, major loser."

10/10/2010 (TELEVISION) I don't usually get into these but I just happen to leave it running as I was doing my homework and I will admit that I actually thought it was okay, I'm more of a "Glee" dude. It's really nothing special but the same old story the keep giving preteens. A good choice for families with preteens or children. I won't watch this again but I did like it.

Camp Rock is among the most basic family channel full length features out there, however, Camp Rock delivers to the best of it's ability. Yes the Jonas Brothers are getting very old, but I seem to like Joe in this, because aside from his poor singing, he actually has a hint of acting that could go somewhere. I didn't expect to like this film as much as I did, so I applaud it's efforts, and say, way to go!