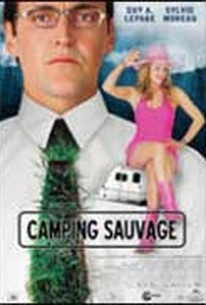 Pierre-Louis is a successful investment broker who sees a hit and run and informs the police. As he is the only eyewitness willing to testify against the driver Jackhammer, the vicious leader of a gang of bikers, Pierre-Louis is whisked off to the witness protection program in a trailer park run by the kitschy Jackie Pigeon. A chapter of inept bikers called the Wanna-Bees also come to stay at the campground. When Pierre-Louis and Jackie are attracted to each other, Pierre-Louis is threatened by the investigating police officer, who also has designs on Jackie. Meanwhile Jackhammer is out on bail and contacts all the biker chapters to be on the lookout for the disguised Pierre-Louis.

Easily as misguided as the much maligned Les Dangereux.

Quite fun, but quite stupid, too. Will very probably give you two or three belly laughs, and then make you hate yourself for it. Too bad a lot of the laughs are unintentional, and the plot is an utter mess from beginning to finish. At least Guy. A Lepage and Sylvie Moreau do use their sharp comedic timing with skill throughout.