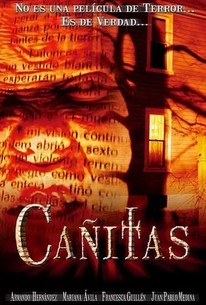 An Ouija board unleashes a wave of supernatural terror on an unsuspecting family. On a quiet evening in April of 1982, the Trejo family came under attack by forces beyond human comprehension. When Carlos Trejo's wife inquires about a former boyfriend who suffered a tragic death, evil spirits seize the opportunity to pass through into the physical realm. Now, in order to protect his family from the forces of darkness, Carlos will put his own life on the line. As the supernatural onslaught grows more intense, news of the Trejos' terrifying ordeal soon spread throughout Mexico. ~ Jason Buchanan, Rovi

There are no critic reviews yet for Cañitas. Keep checking Rotten Tomatoes for updates!

There are no featured reviews for Cañitas at this time.