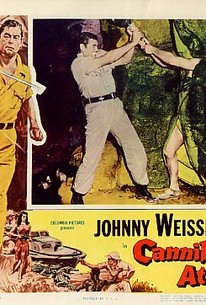 Though Cannibal Attack is officially an entry in Columbia's "Jungle Jim" B-movie series, star Johnny Weissmuller is cast as "himself", rather than his usual Jungle Jim role. The plot finds Weissmuller investigating a series of cargo and cobalt thefts. The villains are a group of sinister foreign spies with Slavic accents, who are being aided and abetted by Luora (Judy Walsh), daughter of a cannibal princess. To expedite the bad guys' dirty work, tribal leader Rovak (Bruce Cowling) has his men disguise themselves as crocodiles. That's right, crocodiles. The rest of the picture is on an equal level of credibility.

There are no critic reviews yet for Cannibal Attack. Keep checking Rotten Tomatoes for updates!

There are no featured reviews for Cannibal Attack at this time.