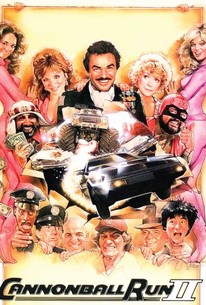 This time the prize is $1 million as a bunch of oddballs illegally cannonball from California to Connecticut in this sequel to the 1981 Cannonball Run--which made a load of cash for the producers. This time, Burt Reynolds and Dom DeLuise are aided by a legion of celebrities (see cast list!).

Frank Sinatra
as Himself

Doug McClure
as The Slapper

Fred Dryer
as CHP Officer No. 3

Fred Dreyer
as CHP Officer No. 3

John A. Zee
as Sheldon

Mario Roberts
as (uncredited)
View All

Execution is uninspired, laughs are hard to find, and the script is also difficult to locate.

Cannonball Run II is one of the laziest insults to the intelligence of moviegoers that I can remember. Sheer arrogance made this picture.

Directed in slam-bang style by Hal Needham, the film is an endless string of cameo performances from a cast whose funny participants are badly outnumbered and whose television roots are unmistakable.

The repetition of the formula doesn't surprise us like the first time. [Full Review in Spanish]

The movie is a genuine cultural artifact, a relic given to us by a band of entertainers from long ago, who live in self-imposed exile in the dusty, neon hellhole of Las Vegas.

This is an easy, madcap, guilty pleasure that plays like a hyperactive cross between Wacky Races and The Dukes of Hazard.

A lazy, sloppily made sequel that doesn't play quite as badly now as it did in 1984. Besides, it's hard to hate a movie that casts Jim Nabors as Homer Lyle.

Feels like home movie footage of a celebrity barbecue that you weren't invited to.

Out of gas, full of celebs.

Cannonball Run II is the sequel to the 1981 coast to coast race film from Hal Needham and Burt Reynolds. Did you see that one? Then you've seen this one. It's a cartoonish romp with a collection of Las Vegas royalty and country stars. Yes, this is another on of those Burt Reynolds good ole' boy comedies. Way over the top, Cannonball Run II is almost fun to watch. Almost. It's poorly written and the performances are strictly phoned in. Did Shirley Maclaine really follow up Terms of Endearment with this? Ugh. And Frank Sinatra's cameo? It's legendary in that the Chairman wasn't even there with the cast, yet appears in the blooper reel. Really? We can easily tell with the poor editing that they were not together. A poorly matched mess. Far removed from Crosby and Hope, it's a road picture injected with steroids and over used '80's cliches. You can watch it, but the camp is turned up to eleven and all you get is a need to go on a real road trip. There isn't much left to say about it. It's just a bad movie.

I think this is more fun than the original with even more over the top action, fights and lovely cars.

Normally Hollywood sequels take a financially successful movie and make an inferior sequel. Here they just made a sequel that was EXACTLY the same as the original. Laziness does not begin to describe...