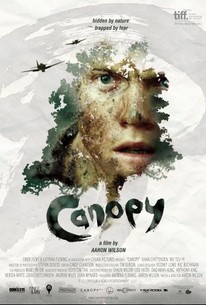 Wartime, 1942. Singapore. An Australian fighter pilot shot down in combat awakens suspended in the treetops. As night devours day, he must navigate through a dangerous jungle in search of sanctuary. Transcending language and culture, CANOPY is a cinematic tour de force exploring the collision of war, nature and its impact on humanity. Aaron Wilson's thrilling, breathtaking film marks the debut of an exciting new voice in Australian cinema.

In many ways, Canopy is closer to a fairy tale than a war film, its soldier like a hero on a perilous, mystical journey through a primordial forest, with a sort of pre-linguistic logic guiding the action.

While not much is said in the Australian director Aaron Wilson's small-scale first feature, "Canopy," the film conveys volumes about war and humanity.

This is a film that eschews epic battle scenes and carnage to delve into the quieter, no less terrifying, moments of waiting and watching.

To the suddenly white-hot adventure subgenre of one or two souls alone against nature... add the more modestly scaled but no less absorbing wartime survival adventure "Canopy."

Much like his fly-boyflyboy underdog in the opening sequence, Wilson simply can't stick the landing.

Canopy functions as a good way for Wilson to establish himself as a talented director and craftsman, but there's very little to go on other than his technical skills.

Though filmmakers had difficulty obtaining permits to shoot in the rainforest, it's impossible to think of it occurring elsewhere. Every element of this film is intricately combined to effectively draw the audience into their world.

The opposite of overreaching, the approach is refreshingly single-minded and a showcase for the director's craft...

Canopy's an exercise in mankind's implicit ability to trust, share, and protect as strength.

Canopy violates nearly every war movie convention, yet it better represents the realities of combat than most of its forerunners.

Canopy is a movie rich of its own world, an 80-minute work of filmmaking that rises above mere war or survival films and becomes something unique.

There are no featured audience reviews yet. Click the link below to see what others say about Canopy!