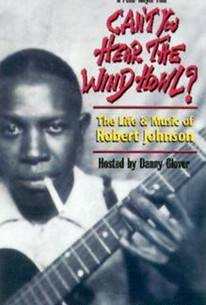 A mix of new interviews with old footage and recordings, this documentary, narrated by Danny Glover, highlights legendary Mississippi blues guitarist-singer Robert Johnson (1911-38). Kevin Moore (who records as Keb Mo) appears as Johnson in narrated reenactment sequences, and producer Don Law is portrayed by Don Law Jr. With both color and black-and-white footage, the film traces the brief but extremely influential career of this near-mythic figure, generally regarded as the king of the Delta blues. Shown at the 1997 Boston Film Festival.

Critic Reviews for Can't You Hear the Wind Howl

There are no critic reviews yet for Can't You Hear the Wind Howl. Keep checking Rotten Tomatoes for updates!

Audience Reviews for Can't You Hear the Wind Howl

Hosted by Danny Glover and contains interviews with Son House, Eric Clapton and Keith Richards. There are many anecdotes about Robert Johnson who contributes to the myth of the blues like no other player has. Dramatizations show The Crossroads a place where you went alone at midnight if you wanted to become a Bluesman. The Devil would come, tune your guitar for you, and if you accepted it back you would be able to play anything you could think of. The catch was, the Devil now owned your soul, and his music often reflected the worries that he was a hunted man.