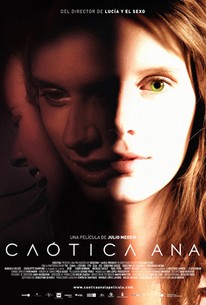 A naïve young artist living with her father in an Ibiza cave sets out to explore life on her own terms in Sex and Lucia director Julio Medem's sensual tale of personal transformation. Ana (Manuela Vellés) is a free-spirited nymph who has only known the natural world. An ethereal, nubile woman who supports herself and her father by selling her colorful paintings at various arts and craft fairs across her scenic island, Ana is eventually discovered by a French woman named Justine (Charlotte Rampling) and lured away to art school in Madrid. Once there, Ana is confronted with a life she has never even imagined -- a life that reveals both profound love and near-unbearable pain. As she takes her first step toward womanhood, Ana gradually discovers that life is more than a geographical and linear journey; it is also temporal and cyclical as evidenced by the many lifetimes she has lived before her current existence. Eventually, in a transcendental bid to explore her many past lives, Ana turns to hypnosis. It is this journey that reveals to Ana the source of her chaos -- the hideous commonality that has followed her from her very first journey. Instilled with the wisdom of her many past experiences, Ana is propelled ever further back in time and across the continents, all the while knowing that one day the time will come for her to use the power to create life, and employ her vast knowledge for the good of all humankind. ~ Jason Buchanan, Rovi

The real charm of this film is that it keeps the viewer guessing what strange turn it will take.

It is not that Caotica Ana lacks ideas - it positively brims with them - but they are all treated with a shallow desultoriness that brings little satisfaction...

Awful and strange Spanish story, and in the DVD that didn't approve English subtitles on - disappointed! I saw Sex and Lucia and I liked it. A LOT! However, this film left me with a bitter feeling of a good artist in a pushing manner to impress. In my opinion, this movie has a wonderful beginning, beautiful images, intricate relations, but then it continues nowhere with exaggeration in an evident effort of being modern, artistic, tempting through crushing images, shocking without content. What's the idea at the end? What's the purpose of Ana's cyclic dying?