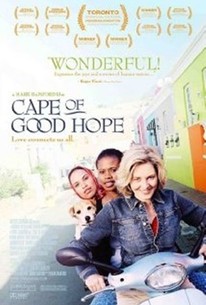 Filmmaker Mark Bamford explores issues of race, class, and faith in contemporary South Africa against a witty backdrop in this comedy drama. Kate (Debbie Brown) runs an animal shelter that seems to attract as many human misfits and cast-offs as dogs and cats; still dealing with the emotional fallout of being abandoned by her father as a girl, Kate welcomes both two- and four-legged friends into her shelter, but isn't quite so open with her heart, and is looking for true love after a series of busted marriages. Jean-Claude (Eriq Ebouaney) is a scientist exiled from West Africa who works at the shelter to make ends meet; while his political and economic fortunes have hit the bricks, his spirit has not, and he has a knack for charming kids, women, and vicious dogs. Lindiwe (Nthati Moshesh) is a single mother attempting to support her son and finish her education after the death of her husband, both against steep odds. Dr. Morne (Morne Visser) is a veterinarian who has also lost his spouse, and seems to carry a torch for Kate. And Habib (David Isaacs) and Sharifa (Quanita Adams) are a couple whose marriage of eight years is on the verge of collapse due to her inability to conceive, testing both their patience and their faith. Cape of Good Hope received its North American premiere at the 2004 Tribeca Film Festival. ~ Mark Deming, Rovi

There's so much Altmanesque activity in the film that even if some storylines temporarily don't work, others keep making up for them.

No matter how heavy-handed the sentimentality gets, the film's intentions seem sincere.

A post-apartheid film in which the characters are less concerned with politics than with matters of the heart.

Despite its shortcomings, Cape of Good Hope is a hopeful piece of humanism that is difficult to begrudge too much.

The stories are interlinked effectively, and the film strikes an upbeat note yet does not address racism and discrimination. For all its affection toward its characters, however, the film is too long and too slack.

A socially-relevant and meaningful film from South Africa which supplies plenty of reasons to feel optimistic about humanity's prospects.

Mostly manages to feel authentic and uplifting, putting a human face on a complex colonial culture.

Cape of Good Hope is a film about people we want so very much to love, people who keep us watching - and keep us smiling.

... there's a temptation to call Cape a South African Crash, but it lacks both complexity and compromised characters.

Around the margins of the story are characters whose behavior is unique.

With its warm heart and charming characters, Good Hope is a good choice.