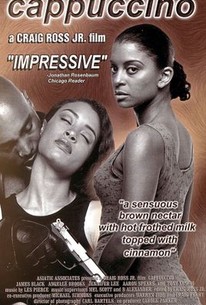 Directed by Craig Ross Jr., Cappucino features James Black as Victor Erickson, a hot young writer with what could best be described as a tepid personal life. Victor, frustrated with the predictability of his marriage, decides he's ready and willing to try something new; a vow which would mark the impeccably timed entrance of Cappucino (Angelle Brooks), a sexy, mysterious woman who exhibits an unnerving amount of knowledge about Victor. From his fantasies and desires to his common goals, Cappucino seems to know it all. Though initially enthralled with the femme fatale, Victor comes to wonder exactly how she came across so much of his personal information, and begins to wonder if Cappucino's presence in his life is a blessing or a curse.

There are no critic reviews yet for Cappuccino. Keep checking Rotten Tomatoes for updates!

There are no featured reviews for Cappuccino at this time.