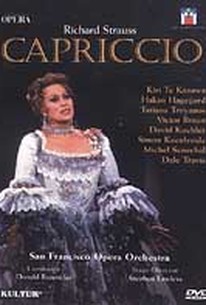 The German classical composer Richard Strauss (1864-1949) penned his final opera, the 1942 Capriccio, as a one-act "conversation piece," set to music - a reference to the work's heavy reliance on long monologues. The narrative, which unfolds in a salon on the outskirts of the City of Lights, follows The Countess as she weighs the value of words (represented by her suitor Oliver, the poet) against the value of melody (represented by her suitor Flamand, the composer). As Oliver and Flamand prepare for The Countess's birthday celebrations, their discussion concerns literature versus music on the surface, but on a deeper level represents their attempts to vie with one another for The Countess's heart. The home video release Capriccio constitutes a filmed performance of the work, as mounted and performed by The San Francisco Opera in 1993. The cast includes Kiri Te Kanawa, Hakan Hagegard, Tatiana Troyanos, and Victor Braun. Eleanor Fazan choreographs, Stephen Lawless directs, and The San Francisco Opera Orchestra provides musical accompaniment. ~ Nathan Southern, Rovi

There are no critic reviews yet for Capriccio. Keep checking Rotten Tomatoes for updates!

There are no featured reviews for Capriccio at this time.