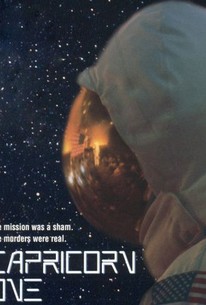 Critics Consensus: A string of questionable plot contrivances threaten to bury its story, but Capricorn One manages to unfurl an amusing, sharply cynical conspiracy yarn.

Critic Consensus: A string of questionable plot contrivances threaten to bury its story, but Capricorn One manages to unfurl an amusing, sharply cynical conspiracy yarn.

A group of three astronauts participate in a government scheme to fake a manned landing on Mars in this conspiracy thriller. Soon, the astronauts discover that they have become expendable, as the government plans to kill them to prevent the truth from being revealed.

Steve Tannen
as Man at Hangar #1

Trent Dolan
as Man at Hangar #2

James B. Sikking
as Control Room Man
View All

Critic Reviews for Capricorn One

Pretty soon the project gets bogged down in innumerable difficulties, not helped by the awfulness of most of the dialogue.

In general, it is a script of conveniences.

The movie attempts to please, but its flaws are excessive. [Full Review in Spanish]

A good conspiracy thriller needs to make its scenario and setup believable to be effective, and this film nails that.

It is very entertaining in terms of its story and acting, mainly because it is not trying to convince anyone of a real life conspiracy. It is just a science fiction movie meant to entertain and amuse its audience.

Can you imagine O. J. Simpson as an astronaut?

A memorable exercise in the paranoia genre.

Audience Reviews for Capricorn One

A decent science fiction that makes you wonder what these industries get up to when things don't go their way, however it's not well executed and ends up running far too long with far too many 'coincidences'.

I believe this was the first film to question the moon landing, and there have been other since this one, but I think this is probably the best of them. I know I really liked it.

Watched it quite a while back. It works more as a comedy than as a sci-fi or a thriller or an adventure movie. Guess that was intentional. Elliot Gloud is incredible. His sequences with his boss are awfully funny. A fun ride worth undertaking once.