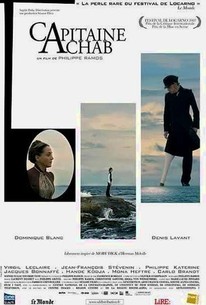 Writer/director Philippe Ramos ponders the formative years of legendary Herman Melville seaman Captain Ahab in this stylized tale of adventure presented in five chapters. When Ahab's mother dies in childbirth, the infant's gruff father (Jean-Francois Stevenin) places his son in the care of his pious aunt Rose Mona Heftre). It is Rose who sparks the imagination of the young boy by teaching him to read the Bible, though when Ahab is reclaimed by his father a decade later the growing boy strives to become a hunter like his old man. Later, after Ahab warms to his father's lover Louise (Hande Kodja), the old man dies and the boy is sent back to his God-fearing aunt. Rejecting Rose and her abusive husband Henry (Philippe Katerine)'s unforginv brand of discipline and infuriated that his aunt confiscated the locket given to him by Louise, young Ahab boldly stages his own kidnapping as an ingenious escape plan. Later, after embarking on a series of youthful misadventures, Ahab is rescued by Pastor Mulligan (Carlo Brandt) after washing ashore on the Atlantic coast. In the following years Ahab learns to fish in the ocean and forms a strange fascination with a whale skeleton on a local shore. Thirty years later, widowed Nantucket laundress Anna (Dominique Blanc) discovers ailing whaler Ahab (Denis Levant) in her garden missing the better part of one leg. Now determined to seek revenge against the creature that left him unable to walk, the obsessive whaler acquires a whalebone leg replacement and sets out with faithful shipmate Starbuck (Jacques Bonnaffe) to take down the whale they call Moby Dick once and for all. ~ Jason Buchanan, Rovi

Ramos...offer[s] us an America of the mind that's one of the most beautiful mental images of America ever seen in cinema.

There are no featured reviews for Captain Ahab (Capitaine Achab) at this time.