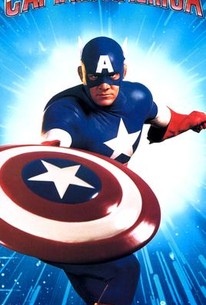 Critics Consensus: Lacking a script, budget, direction, or star capable of doing justice to its source material, this Captain America should have been left under the ice.

Critic Consensus: Lacking a script, budget, direction, or star capable of doing justice to its source material, this Captain America should have been left under the ice.

Scott Paulin
as The Red Skull

Mario Kovac
as Repairman (as a boy)

Whitney Christopher
as Boy at Beach

The movie isn't merely wrong for kids -- it's just all wrong.

Salinger has some good moments dealing with the cultural shock of his Rip Van Winkle reawakening, but film never takes flight under Albert Pyun's leaden direction.

Outrageously, excruciatingly dull, dragging out its 97 minutes to a point that time itself more or less ceases to have any meaning.

The 1990 Captain America shows the viewer, and any aspiring filmmaker, how not to make a superhero movie.

Albert Pyun is a competent director of sci-fi and martial arts action movies, but this tough, brooding comic-book fantasy suffers in comparison to other big-budget superhero adventures, and Salinger lacks charisma as the hero.

Captain America may be a bad film, but its true to the source material and its creator is clearly respected.

For as charming as a piece of 90s nostalgia this movie is, as a whole it's not that good.

Near as awful as previous versions, but it still manages to be lousy.

... a real stiff, a corny piece of nostalgic pulp with cheap action, cheesy dialogue and a charismatically challenged leading man.

Historically, Captain America has always been at something of a loss without a war to fight, and the tale's abrupt switch from anti-fascist heroics to ecological concern takes some force out of the character.

One of the dumbest movies of all time.

In terms of low budget cult films, this film is entertaining, but obviously leaves a lot to be desired. This film is not as awful as what everyone has said, and I quite enjoyed the sheer ridiculousness of it all. Reading on the fact that the film had tremendous issues in terms of Marvel's lack of interest and budgetary concerns, I think the filmmakers were able to pull off something quite amusing for midnight movie fans. The film is of course cheesy and over the top, but if you love low budget cult hits, then this one is for you. Of course the Chris Evans Captain America film is far superior, but this one is still entertaining for what it is. Things could have been done better, but considering with what the filmmakers worked with, they managed to pull a decent low budget affair that is a bit underrated. This is not a film for film lovers looking for something great, entertaining and mind blowing to watch. This version is more for cult film fans. The film tends to be a bit boring in some areas and the story itself could have been thought out more, but for what it is, this version of Captain America is a cheesy, tongue in cheek good time if you're in the mood for something like this. The tone of the film is silly and overall it is a decent film, but is nowhere near as good as it good have been, but that shouldn't distract film lovers who enjoy cheaply made movies such as this. Considering with what they had to work with, Captain America is a worthwhile and amusing low budget film worth seeing if you enjoy this genre.

I haven't seen this since I was about 10, so I can't give it a fair review. I remember my dad and I being very fond of it, and I remember that it was kind of cheap. Other than that, nothing, so I'll give it 3 stars for now... simply for nostalgic purposes.

Back in Marvel's early 90's days. This God awful, pathetic, cheap, and cheesy film plagued the world. It's horrible. Not just the cheap costumes or poor make-up, which goes so far as to give Captain America plastic ears to stop chafing. Captain America is the worst hero of all time. His greatest technique is pretending to be sick so that people get out of their cars. Very confusing, especially when the Red Skull is revealed to be Italian for some reason. It's also porly shot, with one segment lit entirely with blue lights, like some dodgy porno. The shield throwing soon gets old, and even it's camp charm couldn't keep my attention. I'd accept this from the 60's, but after the release of Burton's Batman, comic films should have known better. If this wasn't bad enough, some terrible song numbers are used to cause you to vomit.

A little cheap but it was a good adventure anyway.