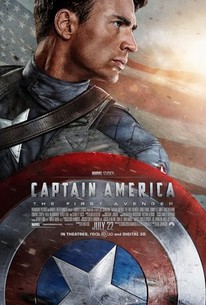 Captain America: The First Avenger will focus on the early days of the Marvel Universe when Steve Rogers (Chris Evans) volunteers to participate in an experimental program that turns him into the Super Soldier known as Captain America. As Captain America, Rogers joins forces with Bucky Barnes (Sebastian Stan) and Peggy Carter (Hayley Atwell) to wage war on the evil HYDRA organization, led by the villainous Red Skull (Hugo Weaving.) -- (C) Paramount

Maxwell Newman
as Boy at Dock

The Falcon and the Winter Soldier First Reactions: “High-Flying” Movie-Level Action And “Grounded” Performances
What Is the Most Underrated MCU Movie?
Marvel Movies Ranked Worst to Best by Tomatometer

Captain America is a truly humble story that fortifies the character both physically and morally.

The story squanders its own fine setup.

The best bit in this year's umpteenth comic book blockbuster, Captain America: The First Avenger, is when Tommy Lee Jones eats some steak.

No clever messages here, just bang-on romance and action, with another fresh twist on 20th-century history woven in for the kids to dive into after the credits have rolled.

It doesn't try too hard for irony or style; the comic-book sensibility remains pure, square, and happily stupid.

Lack of pop. There's not really much here that feels new, like we haven't seen it before.

A perfect throwback and homage to the classic action adventure movies of the 80's.

I love the 1940s touches throughout and the action is really enjoyable.

The 40s setting is well realised, the characters are all really well developed and genuinely fun to watch, and the action scenes are well shot and exciting.

I'm someone who, I think like everyone else when hearing about this, thought that there would never be a good incarnation of Captain America, especially since the colossal failure of a film in the 90s. Boy was I and the rest of the world fooled when this came out. I think the main reason that many people were really skeptical about the film was probably due to how a superhero film probably wouldn't do as well as it could or wouldn't be as serious as it could be since it takes place in the 40s during WWII and sine Captain america, was more of a piece for its time when it was made, so people felt that the Nazi shtick would probably get old after a while, especially since it had been done in so many films and video games prior. Also Chris Evans also might've been a major reason people were worried about the films, especially since he played another Marvel superhero prior and that didn't go over that well *CoughHumanTorchCough.* But thankfully Evans does a fantastic job as the Captain and all the other actors do great jobs too and don't make any of the characters too stupid or cheesy unlike how other 40s era films made in the 90s, 2000s and on have been (Red Tails anyone?) Hugo Weaving being my favorite of all the characters, I mean you already are golden with a combination like that already. incredibly good villain actor and actor in general, and one of my favorite Superhero villains BAM (Plus that makeup is amazing). And while the films plot may not be as good as some other superhero films, it still is an enjoyable movie with that set aside and is pretty faithful to the comics as is. If you like action movies that don't prefer the typical aliens, robots, explosions bang bang movies made nowadays, you'd probably like this movie.

Another forgettable prequel to The Avengers that doesn't seem to be something of its own, with a plot that is mostly dull, action scenes that are unimpressive for a superhero movie, and a poorly developed villain with uninspired plans of destroying the world.

An exact application of the Marvel Superhero Origin Story Template. The lack of interesting backstory or a truly "super" power makes for a boring outing from the usually reliable stable. Hugo Weaving was great in a mask again, though.

Excellent film! Marvel continues to roll in the big money with successful super hero movies. Captain America easily captured the taste and flavor of WW2 and the origin of the First Avenger.