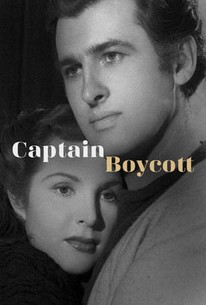 Set in early 19th-century Ireland, this fact-based drama chronicles the peasant uprising of peasants who finally tire of the brutality of Captain Boycott, the rent collector for the Earl of Erne. The impoverished farmers conspire to banish him from the area. When Boycott learns of this, he tries to change his image by spending his entire fortune launching a newspaper promotion of his good points. It doesn't work and in desperation, he squanders the rest of his fortune on buying a race horse. He enters it in a big race and bets the rest of his fortune upon it. Unfortunately, just before it wins, the peasants spring to action, start a riot and successfully oust the cruel captain from their lands. It is from this situation that the English word "boycott" is derived. ~ Sandra Brennan, Rovi

The opening scenes of the film are jerky and confusing, but once it gets into its stride this exciting historical theme is well handled.

There are no featured reviews for Captain Boycott at this time.