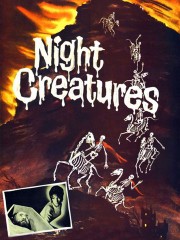 Super Reviewer
Byron B
January 22, 2019
Part of an 8 film set of Hammer horror. The poster seems to reference skeletal horses and riders such as appeared in some Georges Melies' and other early silent horror films. I looked forward to how the British studio handled this effect. However, the black costumes with white skeletons painted on shot mostly in a dark forest did not blend well to sell the illusion, and when they were shot in a studio with Universal's Invisible Man like effect then superimposed on scenery it also appeared shaky. Several stock cast and crew of Hammer are involved such as Cushing, Reed, and Hinds. The 18-century coastal town in England is a somewhat unique setting. The antagonism between the villagers and the soldiers is well played. The drama is a bit dull, but when you figure out the twist (involving pirates) the pieces begin to fall into place. Even though the skeletal Marsh Phantoms do not ride to inspire fear in other races, but in those who support the authority of the crown, it suggests an uncomfortable parallel.

Carlos I
September 10, 2017
Captain Clegg is a little devil. It's a pretty fun hammer affair in their typical Gothic style. Cushing and Reed stand out, as they chew the scenery.

Ryan V
½ October 9, 2016
This is yet another great Hammer effort. It's a mashup of a pirate/ghost/conspiracy story. Cushing is brilliant as always, while Oliver Reed and Michael Ripper give solid supporting performances. The look of the "marsh phantoms" is simple but wonderfully effective.

Art S
March 10, 2016
Hammer tries their hand at the oft-told tale of Dr. Syn (here renamed Dr. Blyss), who defies the King's men and their taxes to smuggle brandy and gin and deliver the proceeds to the poor. Disney's film starring Patrick McGoohan is perhaps better known but with Peter Cushing in the lead, the Hammer version is solid enough with some creepy moments out on the marsh (where the smugglers pretend to be phantoms) added to up the horror quotient. Probably there is more bustling about than true action here but things still feel adventuresome and suitably enticing with secret passages and men in scarecrow costumes and all that. For only 81 minutes, what more can you ask?

Karsh D
December 6, 2015
A captain arrives at an English coastal town but finds he has to put up with marsh phantoms and the like. Good hammer horror offering

Paul D
December 2, 2015
Likeable Hammer Horror despite the fact there's very little actual horror to be found in it.

Wes S
½ May 21, 2015
Nice setting, a thrilling though predictable story, and fun effects. The night creatures are kind of left out for most of it, but there's a interesting pirate/settler sub-story that leads to some neat thrills. Cushing has a more unique, though not terrible far from his others, role.

Andrew I
October 9, 2013
One of the less-terrible Hammer films, this isn't really a horror film as such either, being more concerned with smuggling around Romney Marshes and general skulduggery to keep it going. It was alright if a little cheap-looking, Oliver Reed's action scenes were quite amusing, and the 'ghostly' horses were quite funny (especially when they forgot to wear their costumes!). 6.5/10

Muhammed S
½ September 30, 2013
A classic hammer suspense & thriller movie. A bit predictable whats happening but I guess it was intently made this way. Great fun if you have an eye for classics and gothic styled movies.

Kevin R
September 4, 2013
Engaging enough but feels dated and contains nothing special. A film which would have entertained more had I been a young teen maybe 25 years ago. Not worth going out of your way to see, just watching a Hammer collection of thriller/suspense films, this was the first and I sure hope they get better.

Gabriel W
September 18, 2012
The movie was actually pretty good! The acting wasn't bad, the filming wasn't bad, and the storyline was highly entertaining. There's nothing like a good pirate story. I don't see, though, how the movie could be categorized under the horror genre. It was suspenseful, but nothing terrifying. I guess it could've scared the audience in 1962. I liked it, and I do recommend it.

James C
½ June 10, 2012
Local parishoner Dr Bliss looks after his flock with all his heart and soul, but little do they know the secret he hides.

This is Hammer's take on the Dr Syn story, but seeing that did not have the rights, there are some radical changes. The location is the same, as is the basic story about smugglers. Dr Syn now becomes Dr Bliss with a completely different back story, and the Scarecrow character is hardly there. So, in all this is a completely different movie from it's Disney counterpart and has a slightly more adult feel. The acting is top notch, but Peter Cushing is a little less believable in the lead role. The story meanders a little and ends up being more of a love story with Hammer's signature gothic feel. All in all this is a fun movie to watch, but is not a patch on the Disney version.

Whit w
½ March 29, 2012
Hey! Wait a second! This isn't a horror movie. It's a pirate movie. I think truth in advertising has to be brought into question here. Hammer's trying to pull a fast one as there is nothing in this movie that is scary in the least. But this is a really good tale about a little town and its struggle to survive the unfair taxation of its citizenry by the Government. And as boring as that sounds, nothing could be further from the truth.
The whole thing starts with a very effective scene of a crewman on the ship of the feared Captain Clegg. The crewman is being punished for apparent wrongdoings. His ears are slit, his tongue is cut out and he's left on an island to die. This set up really engages you and starts the movie off on a high note. Next, we see visions of skeletons on horses who scare an old man to death in the marshes surrounding the town.
After that strong opening, we meet up with Peter Cushing as the spiritual leader and minister of a local church. From that point on, the movie belongs to Cushing. His performance is as good if not better than anything else I've seen him in. His role here is totally different than his horror performances. Here, he is practically a secret agent, as he plots and carries out masterful schemes to thwart the King's army. Eventally we are treated to Cushing in a fight that is worth the price of admission. There is much else to like here. Oliver Reed as Harry Crabtree and Yvonne Romain as the gorgeous Imogene come to mind.
The story carries with it a mild twist that brings everything together nicely. Much of the dialogue is effective in that it sets up a lot of suspicion and distrust that pays off as the plot progresses. There aren't a lot of special effects and the "night creatures" are actually pretty sloppily done. But they're practically unseen so their overall effectivenss is minor to the advancing the story.
If you watch "Night Creatures", don't expect the typical Hammer horror experience because it isn't here. What you will encounter though, is a really enjoyable tale with elements of suspense, thrills and even a fair bit of action.

Tori D
October 17, 2011
This movie is so much fun once you've viewed an assortment of what Hammer has to offer. It feels like a culmination of everything that's great about these movies, such as the actors (leading or supporting) or the stories (horrifying or compelling). Simply fun is the best way to describe it.

Colin F
½ October 15, 2011
It is always great coming across a Hammer Film I have not seen and Captain Clegg is a right Jem. There is more adventure than horror in this one, but what a great adventure it is with a flawless performance from Peter Cushing and others such as Patrick Allen and Oliver Reed. For a film that was made almost fifty years ago it really is excellent with some stunning imagery such as the skeletons on the horses, with a very strong story which this time is not about vampires or monsters. The script might be slightly predictable but still an absolute classic.

Super Reviewer
Aj V
½ September 21, 2011
It's pretty obvious what is really going on in this movie, although they try to present it as a mystery. It's really predictable, but I liked the overall plot anyway. So, I'll say, I liked this movie, but it could have been better.

Jonathan S
½ July 20, 2011
Another solid good looking film from Hammer studios. In addition to the great Peter Cushing and a smokin' hot Yvonne Romain it also features a young Oliver Reed.
Page 1 of 3