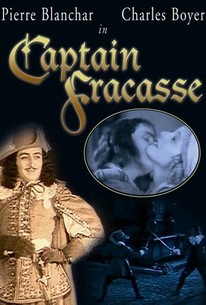 The first of three film versions of Theophile Gautier's popular adventure novel Le Capitaine Fracasse was co-written and directed by Alberto Cavalcanti in 1929. Pierre Blanchar essays the title character, who when first we see him is impoverished nobleman Baron de Solignac. Living a solitary existence in his crumbling ancestral castle, the Baron's existence is brightened by the visit of a travelling harlequin troupe. Falling in love with Isabella (Lien Dyers), the troupe's leading lady, the Baron joins the strolling players, assuming the stage "persona" of Captain Fracasse. In this guise, our hero performs various and sundry feats of derring-do, culminating with his rescue of Isabella from the clutches of the evil Duke de Vallombreuse. Future Hollywood screen idol Charles Boyer shows up in a choice supporting role. ~ Hal Erickson, Rovi

There are no critic reviews yet for Captain Fracasse (La Capitaine Fracasse). Keep checking Rotten Tomatoes for updates!

A good romantic adventure movie with nice swordplay and some good actors. The story itself is pretty predictable in the end, though, but it's still a pretty good movie.