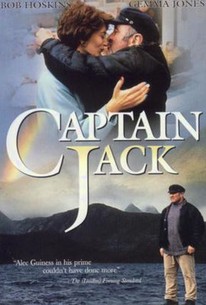 Robert Young directed this fact-based British comedy-adventure. In 1791, Captain Scoresby sailed from Whitby in northern England to the Arctic. Mariner Captain Jack (Bob Hoskins), obsessed with Scoresby, is troubled by the fact that Scoresby has not been adequately acknowledged and honored in his town -- so Jack sets out to retrace Scoresby's journey with a curious and offbeat crew -- an Australian hitchhiker (Peter McDonald), two elderly sisters, and stowaway Tessa (Sadie Frost). They set sail, pursued by NATO, the Royal Navy, and a mixed bag of various journalists and photographers. Shown at the 1998 Cannes Film Festival. ~ Bhob Stewart, Rovi

There are no critic reviews yet for Captain Jack. Keep checking Rotten Tomatoes for updates!

There are no featured reviews for Captain Jack at this time.