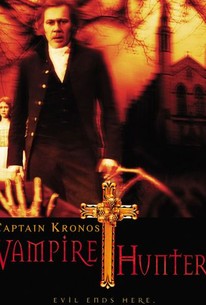 A late entry from the foundering Hammer Studios, this intriguing and highly original twist on the vampire motif -- featuring for once a hero more charismatic than the vampires with which he does battle -- was the first in a planned series of Kronos films, but poor planning on behalf of its overseas distributors killed the franchise's great potential in the American market. Kronos (Horst Janson) -- a kind of swashbuckling Sherlock Holmes of the occult sciences -- and his hunchbacked companion Professor Grost (John Cater), arrive in the village of Durward where the local young wenches are being victimized by a family of vampires that drain youth, not blood, from their victims, turning them into withered old hags. Kronos' mystical intuition and powers of deduction lead him to the elderly Lady Durward (Wanda Ventham) and her pompous children Paul (Shane Briant) and Sara (Lois Daine), and he soon squares off against his vampiric foes with a lethal sword (fashioned from a sacred cross) and a bag of occult tricks (including an interesting use of dead frogs). Well-photographed and cleverly directed by Brian Clemens (Dr. Jekyll & Sister Hyde), this is one of Hammer's few attempts to broaden its audience in the 1970's -- a trend which reached its zenith of zaniness with everybody kung fu fighting in the Hammer/Shaw Brothers collaboration Legend of the Seven Golden Vampires.

Today, irony has started to look more and more like the death knell for serious horror films, and so the relative straightforwardness of a Captain Kronos: Vampire Hunter is a welcome throwback.

A film with laughable dialogues and some awkwardness in its staging. [Full review in Spanish]

A goofily endearing old chestnut, and one that any self-respecting horror fan will eventually want to check out for themselves.

Charming cross between swashbuckling, western and horror with an exciting plot, gruesome makeup effects and beautiful female companions. One of hammer films' best.

A Hammer-Horror Swashbuckling/Western Vampire film with the best crash zooms EVER!

A swashbuckling vampire tale, I love it. This movie is very cool, it's about a vampire hunter back in the old days, and he travels to this town to slay the vampires. I highly recommend this Hammer horror movie.