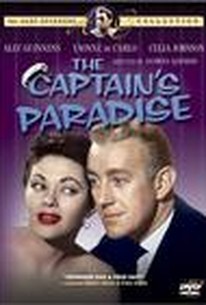 In this bright British comedy, we meet Capt. Henry St. James (Alec Guinness) as he stands before a firing squad and then learn of the curious chain of events that brought him to his fate. Henry is a ship's captain ferrying a steamer between Gibraltar and North Africa on a regular basis, and he's taken the notion of "a girl in every port" to a whole new level; he has a wife on each side of the water. In Gibraltar, there's Maude (Celia Johnson), an even-tempered housewife who keeps the house tidy and has dinner ready when Henry likes it. In North Africa, mate number two is Nita (Yvonne DeCarlo), who is a sultry fun seeker who likes to hit the nightspots and dance 'till dawn. Between the two of them, Henry would seem to have the best of both worlds; Chief Officer Ricco (Charles Goldner) openly envies Henry's remarkable romantic situation. But things start to go sour when Maude suddenly decides she's a stick in the mud and wants to start living it up, while Nita becomes a homebody and begins learning to cook; Henry is none too happy about either development, and before long he finds he has no spouse on either shore. The Captain's Paradise was trimmed from 93 to 84 minutes for its initial United States release. ~ Mark Deming, Rovi

Roy Purcell
as Officer of the Watch

Alejandro Martínez
as Guitarist
View All

Critic Reviews for The Captain's Paradise

Alec Guinness scores again, this time as a subtle sea dog who believes that civilized bigamy is man's key to happiness. The basic joke seldom runs thin in this roguish British comedy.

Audience Reviews for The Captain's Paradise

"The Captain's Paradise" starts with Henry St. James(Alec Guinness) calmly asking the firing squad to please hurry up as he has other places to be, while matter of factly refusing a blindfold. His uncle Lawrence(Miles Malleson), who just missed Henry, is told by Henry's now former Chief Officer, Ricco(Charles Goldner), how he came to be in such a predicament. It may not surprise some that it involved a woman, namely Henry's lover Nita(Yvonne De Carlo), as Ricco recounts happier times like their second anniversary in North Africa. On the other side of the Mediterranean in Gibraltar, where his crew has not been granted British visas to disembark, Henry celebrates his third anniversary with his wife Maud(Celia Johnson). Even though it is more windup than payoff, "The Captain's Paradise" is still a witty and breezy farce that is ahead of its time in exploring gender relations. Here, the joke is on Henry as he underestimates not one but two women which while certainly no record is still very impressive.(Relax, I don't think I'm giving anything away by saying that since we do know he will end up in front of a firing squad but how he gets there might surprise you.) Henry might think of his life as perfect, containing the best of all worlds, including male camaraderie, and, admittedly, it is a rather clever idea. But if he were as smart as he thought he was, then he would have found a cure for cancer.

Cute comedy, Guinness is smooth as always, Yvonne DeCarlo besides being stunning proves herself adroit at comedy.