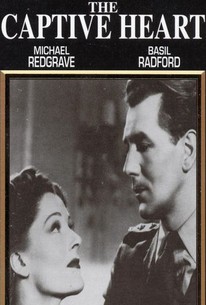 The Captive Heart is set in a German POW camp for British soldiers. Michael Redgrave plays a Czech patriot, who has assumed the identity of a deceased British officer to avoid being executed by the Nazis. When captured and placed in the camp, the British prisoners suspect the still-incognito Redgrave of being a spy. Only his conspicuous courage during an escape sequence vindicates the secretive Redgrave. The film's tinderbox tension is relieved with a joyous finale, which utilizes a fireworks display as adroitly as Hitchcock did in To Catch a Thief.

Critic Reviews for The Captive Heart

The Captive Heart hits all the expected beats and is enlivened by expert direction and a reliable cast of actors...

Given the immediacy, it is perhaps no wonder that the story is leavened with some melodrama and romance, yet watching it now, Basil Dearden's film still has a surprisingly naturalistic aspect.

Audience Reviews for The Captive Heart

There are no featured audience reviews yet. Click the link below to see what others say about The Captive Heart!