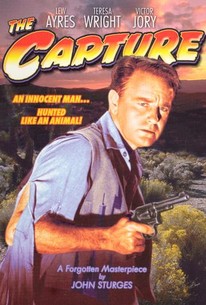 Virtually ignored at the time of its release, Capture has built up a small but enthusiastic following since its lapse into public domain. American oil man Lew Ayres kills a coworker whom he suspects of robbery. Thinking it over, Ayres wonders whether or not the man was innocent. He seeks out his victim's widow, played by Teresa Wright. They fall in love and marry, which does nothing to soothe Ayres' guilty conscience. When he discovers who was actually behind the robbery, Ayres goes after the real culprit, who is accidentally killed before justice can be done. Falsely accused of murder, Ayres now fully understands the untenable position of the man he'd killed so long before. The Capture was produced by Niven Busch, the then-husband of Teresa Wright.

Critic Reviews for The Capture

There are no critic reviews yet for The Capture. Keep checking Rotten Tomatoes for updates!

Audience Reviews for The Capture

There are no featured audience reviews yet. Click the link below to see what others say about The Capture!