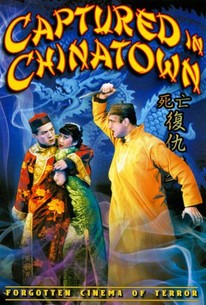 Tarzan, "The Police Dog," stars in this ultra low-budget thriller from independent producer Bert Sternbach. The human leads, Marion Shilling and Charles Delaney, play reporters assigned to cover the wedding between members of warring Tong families. Expected to end generations of feud between the Lings and the Wongs, the nuptials turn into tragedy when a mystery intruder clad in Ling family attire valuable snatches the necklace from the bride. As the groom (Wing Foo) attempts to stop the fleeing thief, he is brutally shot and killed and his father calls for the feud to continue. Meanwhile, cub reporter Ann Parker (Shilling) is kidnapped by the murderer (Paul Ellis), who thinks she may be able to identify him. But Tarzan, the police dog, races to the rescue with Bob Martin (Delaney) in tow and the killer is unmasked in the nick of time. The Lings are cleared of suspicion and peace between the families is restored. ~ Hans J. Wollstein, Rovi

James B. Leong
as Wong

Critic Reviews for Captured in Chinatown

There are no critic reviews yet for Captured in Chinatown. Keep checking Rotten Tomatoes for updates!

There are no featured reviews for Captured in Chinatown at this time.