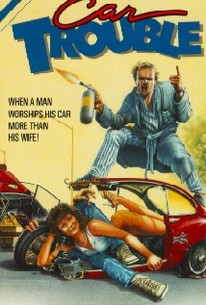 In this comedy, Julie Walters and Ian Charleson play a married couple, Jacqueline and Gerald, who somehow endure a fractious relationship that would have sent others running to divorce court in a second. One point of contention is Gerald's new Jaguar, a car he would take over Jacqueline any day. When she is trapped inside the new car with an amorous salesman in a compromising clinch, the police have to cut up the Jag in order to get them out. From that point onward, Gerald has murderous designs on his wife, and the comedy thins out even more.

Anthony O'Donnell
as Frederick
View All

There are no critic reviews yet for Car Trouble. Keep checking Rotten Tomatoes for updates!

There are no featured reviews for Car Trouble at this time.