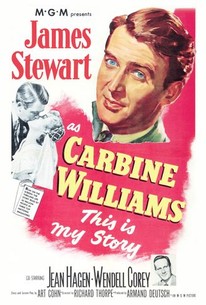 This exciting biography chronicles the life of the man who invented the M-1 carbine rifle, a gun that changed the ways in which wars were fought. The tale begins as inventor Marsh Williams serves a 30-year sentence for supposedly killing a revenuer during a raid in a brutal North Carolina prison farm. There he secretly occupies himself by building a new kind of gun. He doesn't plan to use it to escape. The warden finds out about William's illicit activity and takes the prototype. Williams then begs the warden to return it because he believes the weapon can help the boys fighting WW II overseas. When the warden sees that Williams is sincere, he allows him to finish the weapon.

Jordan S. Cronenweth
as Will Williams

Erik Nielsen
as Child at Wedding

Sam Flint
as Board Member

Nolan Leary
as Board Member

Marshall Bradford
as Board Member

George Pembroke
as Board Member

James Harrison
as Trusty
View All

The overlooked pic is one of its legendary star's least seen films that deserves to be viewed.

Caught some parts of this on TV. Pretty cool film, especially how it was based on the story of the M1 Carbine's creation. Jimmy Stewart gives a solid acting performance here, as usual.