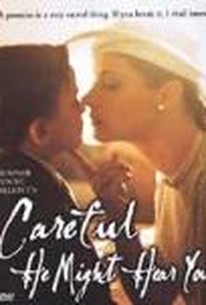 Set in Australia in the 1930s, this drama stars Nicholas Gledhill as P.S., a six-year-old boy who lives with his Aunt Lila (Robyn Nevin) and Uncle George (Peter Whitford). P.S.'s mother died in childbirth, so her sister Lila took him in, and while George and Lila don't have a lot of money, they've always done the best they can to give the boy a good home. One day, Lila's other sister Vanessa (Wendy Hughes) arrives after spending several years touring the world; Vanessa is quite wealthy, and upon her return to Australia, she expresses an interest in taking custody of the child. Lila is willing to let Vanessa visit with P.S., and his rich aunt is able to turn his head with limousine rides and lavish gifts. But when Vanessa decides she wants the boy full time, Lila decides to fight her in court. The case is complicated by the arrival of P.S.'s long-absent father, Logan (John Hargreaves), an alcoholic who loves his son but is incapable of caring for him. Careful He Might Hear You won eight Australian Film Institute Awards, including Best Picture, Best Actress (Hughes), and Best Supporting Actor (Hargreaves). ~ Mark Deming, Rovi

A melodrama among the pedigree Australian pictures of the early 1980s.

[It] is a decidedly feminine film, one that is more concerned with issues of class, money, and family. It is a period film that revels in sumptuous costumes amid decadent sets and divine cinematography of Oscar-winning DP John Seale

From the very first shot it's clear that cinematographer John Seale contributes enormously to the film's success. It's without doubt one of the most wonderfully photographed films of Australian cinema.

Struggle between two sisters for custody of an eight-year-old boy.

There are no featured audience reviews yet. Click the link below to see what others say about Careful, He Might Hear You!