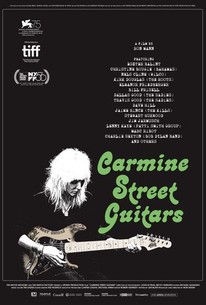 Critics Consensus: Whether you're a guitar lover, a student of New York City history, or simply interested in celebrating a deep commitment to craft, Carmine Street Guitars strikes a chord.

Critics Consensus: Whether you're a guitar lover, a student of New York City history, or simply interested in celebrating a deep commitment to craft, Carmine Street Guitars strikes a chord.

Critic Consensus: Whether you're a guitar lover, a student of New York City history, or simply interested in celebrating a deep commitment to craft, Carmine Street Guitars strikes a chord.

Once the centre of the New York bohemia, Greenwich Village is now home to lux restaurants, and buzzer door clothing stores catering to the nouveau riche. But one shop in the heart of the Village remains resilient to the encroaching gentrification: Carmine Street Guitars. There, custom guitar maker Rick Kelly and his young apprentice Cindy Hulej, build handcrafted guitars out of reclaimed wood from old hotels, bars, churches and other local buildings. Nothing looks or sounds quite like a Rick Kelly guitar, which is the reason they are embraced by the likes of Bob Dylan, Lou Reed, Patti Smith, Jim Jarmusch, just to name a few. Featuring a cast of prominent musicians and artists, the film captures five days in the life of Carmine Street Guitars, while examining an all-too-quickly vanishing way of life.

If a film had a smell, this one would be of sawdust, varnish and pure love.

Experiencing this documentary without encountering any advance hype is like stumbling into the cozy Greenwich Village shop of the title: it's a ride down the rabbit hole to a world of unexpected and singular pleasures.

[A] leisurely Sunday stroll of a documentary about the cozy Greenwich Village mainstay in New York City that has served as a sanctuary for musicians.

Carmine Street Guitars is an affectionate, somewhat elegiac glimpse into a master and a craft that, like so much of the surrounding neighborhood, is steadily being corporately gentrified.

The subject is so interesting, and the music played by these people is so gorgeous.

Ron Mann's observational documentary provides a similar refuge. Even its contrivances are comforting.

Some documentaries make you angry, others make you change your mind on something you didn't even know you had an opinion on. Others, like Carmine Street Guitars, just fill you with an overwhelming sense of tranquillity and joy.

The film not only procures an appreciation for music and handcrafted art, but also an admiration for the resilience of small shops surrounded by grand skyscrapers and builds.

Mann allows his camera to simply exist in the space...he just happens to be there when magic is being created and artistry is at play.

As a sort of video capsule of an important part of New York history, Carmine Street Guitars is sweet and simple, presenting a necessary message of embracing the arts, while supporting local and independent businesses.

The film harkens back to Mann's earliest and arguably best work, like the free jazz doc Imagine the Sound and the who's who of rhythm and words Poetry in Motion.

There are no featured audience reviews yet. Click the link below to see what others say about Carmine Street Guitars!