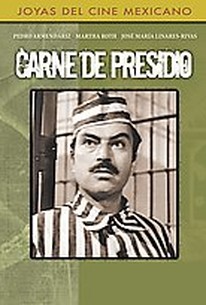 Pedro Armendariz stars as a man struggling to survive a stint in prison in Carne de Presidio. He is convicted of murder after accidentally killing the cruel husband of a female friend. His own family slides into hard times as the man stays behind bars. Soon he begins plotting an escape, but ends up trusting some untrustworthy men in the process. Soon the hero is in over his head with some very bad guys. ~ Perry Seibert, Rovi

There are no critic reviews yet for Carne de Presidio. Keep checking Rotten Tomatoes for updates!

There are no featured reviews for Carne de Presidio at this time.