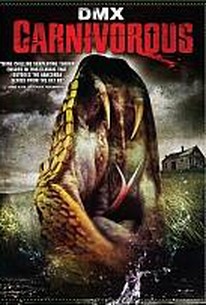 A group of desperate humans battle demonic beasts in an infernal labyrinth, and make a terrifying discovery about the true nature of reality. Abducted and stuck into a cramped chamber, Kate Walker awakens to find herself and 19 strangers trapped in an endless maze of dark caves. Later, while avoiding deadly traps and fending off hordes of hellions, Kate is saved from certain death by a mysterious stranger named Jack. Jack has been stuck in these caverns for months, and he thinks he's finally found a way out. Before they can escape, however, Kate and Jack encounter the man responsible for thrusting them into this otherworldly nightmare, and learn that the only thing holding these demons in the underworld is the promise that they will always have fresh victims to hunt through the darkness.

A day in the life of DMX would have been a lot scarier than this attempted frightmare.

There are no featured audience reviews yet. Click the link below to see what others say about Carnivorous!