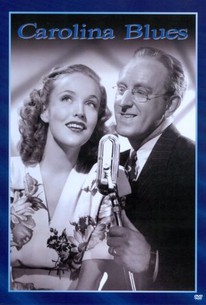 In his final starring film, bandleader Kay Kyser is cast as bandleader Kay Kyser. Picking up where Kyser's previous RKO Radio film Around the World left off, Columbia's Carolina Blues finds Kay and his band returning to America after a worldwide USO tour. Phineas J. Carver (Victor Moore), the woebegone "black sheep"scion of a powerful family of industrialists, poses as one of his wealthier relatives to persuade Kyser to perform at a defense plant. When Kyser's regular vocalist Georgia Carroll quits the band to get married, Carver's talented daughter Julie (Ann Miller) steps in as replacement. Naturally, Julie is a hit, and equally naturally, she lands Kyser as a husband. Outside of the expected musical numbers (which, in addtion to Kyser's aggregation, feature such artists as The Step Brothers and the Nicholas Brothers) Carolina Blues is highlighted by the bravura performance of Victor Moore, who essays five roles in all. Ironically, singer Georgia Carroll did retire from show business in real life to get married-to Kay Kyser! ~ Hal Erickson, Rovi

Georgia Carroll
as Herself

Harry Babbitt
as Himself

Robert B. Williams
as Roland Frisby

Sully Mason
as Himself

There are no critic reviews yet for Carolina Blues. Keep checking Rotten Tomatoes for updates!

There are no featured audience reviews yet. Click the link below to see what others say about Carolina Blues!