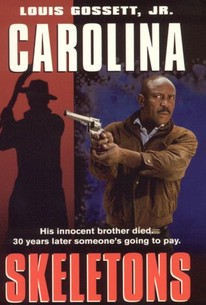 Carolina Skeletons is based on a prize-winning novel by David Stout. Louis Gossett Jr. plays a former Green Beret colonel who returns to his home town after thirty years. As a child, Gossett was forced to look on in horror as his brother was tried and executed on a trumped-up murder charge. Now that he's back, Gossett seeks out new evidence, intending to bring the real killer to justice. Unfortunatel, there are several people in town who'd prefer that the past remained buried-and aren't averse to burying Gossett should the need arise. Made for television, Carolina Skeletons debuted September 30, 1991. An R-rated version was later prepared for cable TV.

There are no critic reviews yet for Carolina Skeletons. Keep checking Rotten Tomatoes for updates!

There are no featured audience reviews yet. Click the link below to see what others say about Carolina Skeletons!