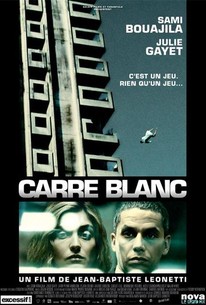 A couple struggles to survive amidst an emotionally barren landscape in this stylized sci-fi drama. When he was a boy, Philippe (Sami Bouajila) witnessed the suicide of his mother, who hoped the event would give him the ability to persevere in a world where emotions were becoming obsolete. While attending a state-run school, he struck up a friendship with Marie (Adele Exarchopoulos) and fell in love with Marie (Julie Gayet) when the latter stopped him from taking his own life. Years later, Philippe and Marie's relationship has grown cold, and he makes his living working for the state's corporate arm, putting citizens through strange, grueling, and often impossible tests designed to determine who will blend colorlessly into the social fabric and who will stand out for good or bad reasons. The first feature film from writer and director Jean-Baptiste Leonett, Carre Blanc received its North American premiere at the 2011 Toronto International Film Festival.

An intriguing and notable debut, if not altogether masterful.

Carré Blanc is perhaps a bit too vacant and vague to its intentions to hit a viewer in any really emotional way, but it utilises its barely 80-minute runtime in an economically beguiling way...

An impenetrable dystopic vision that excels at crisp imagery in the service of pretentious shallowness...and little else.

There are no featured audience reviews yet. Click the link below to see what others say about Carré blanc!