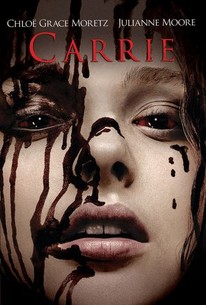 A reimagining of the classic horror tale about Carrie White (Chloë Grace Moretz), a shy girl outcast by her peers and sheltered by her deeply religious mother (Julianne Moore), who unleashes telekinetic terror on her small town after being pushed too far at her senior prom. Based on the best-selling novel by Stephen King, Carrie is directed by Kimberly Peirce with a screenplay by Roberto Aguirre-Sacasa. (c) Sony

50 Fresh Scary Movies and TV Shows to Watch on Netflix
Now Streaming: The Purge: Anarchy, Sharknado 2, and More
Video: Grae Gets Carrie-d Away

Carrie resonates for women in particular because it touches on so much of the horror of becoming female that it's almost too real. I love that Kimberly Piece chose to honor that horror faithfully, even if it doesn't make for a radical re-visioning.

Moretz plays Carrie as either a constantly petrified, meek outcast or a grimacing destroyer. Peirce fails to build a connection between audience and protagonist.

A tired, unneeded copy of Brian De Palma's far superior work, with the small changes it makes adding nothing of significance.

Peirce wants to make a hit, and, even with source material this strange, it feels as though she has. But if so, that's all she has made.

This is a sturdy tale that deserves to find a new audience. It's just a shame they won't find anything new in the process.

You would have trouble arguing for any significant shift in perspective.

Generally there's too much CGI - the floating books are silly - and since when can Carrie fly?

This is the epitome of pointless movie remakes.

Kimberly Peirce takes a classic film and manages to be both faithful to the original while breathing new life into it.

Why a new version? Why a remake? Why a reimagination? The answer is because this new 2013 Carrie from director Kimberly Peirce is just that - a reimagination that harkens back to the original source material - [Stephen] King's novel.

While this quality remake will never be regarded in the same way, it achieves all the right shocks in a majorly unsettling way.

This passable remake is proof that you can redo a great film in a different way and still obtain an effective result, even if far from the same level of quality - and most of its faults can be attributed to stylistic excesses and obvious inconsistencies that appear in the end.

Unnecessary remake that is still somewhat entertaining during the set-up but totally falls apart during the infamous prom scene. Even the great Chloe Moretz feels oddly out of place channeling X-Men gestures as she is laying waste to the small town. There is nothing scary about this film except for her mother's religious fanaticism. And the final anti-mobbing statement feels really dumb.

It's been 40 years since Stephen King published his first novel. Over the proceeding decades we would see an onslaught of King's work translated to the big screen, some with great results and the others resulting in garbage, but that's the way it is with a body of work that is continuously wanted by an eager public. This is the third time that the first novel by King has been presented, the first being Brian DePalma's early classic that exhibits all that DePalma was to be, good or bad, and starred and excellent Sissy Spacek as the title character. There was a sequel somewhere, a TV remake (neither of which I can comment on because why should we bother). This newest version comes to us from director Kimberly Peirce (Boys Don't Cry), bringing us an examination of a scared, uninitiated high school girl from an actual woman. Who would have thought... The story is the same. Carrie White (Chloe Grace Moretz) has lived a sheltered life with her mother (Julianne Moore), a religious zealot trying to make amends with what she considers a hedonistic past. As always, this goes great for a senior in high school who becomes a woman in the middle of gym class. a guilt ridden fellow student decides to have her boyfriend take Carrie to the prom to make amends, but other students aren't as guilty as she. If you have seen any other the previous incarnations, you know the rest. The film is your basic rehash of the original film and book. There is nothing new here. It's the same animal as 40 years ago. The big finish is epic and satisfying, but the ending leaves something to be desired, almost taking a twist into action overload Michael Bay territory. This is where the original film has the advantage over this new model. The ending here is just to much for a film such as this. It just doesn't gel with the rest of the film. As always, remakes are remakes and Hollywood still tries to milk an old franchise for all its worth. Carrie is a simple rehash that isn't even twisted around a bit to bring us something new. Unless you're viewing this for free, skip it. You've seen the original. Go find a nice independent film or documentary. Experience something new.

The second time I have seen this 70's classic remade, and the second time I wish they had left it alone. Like Angela Bettis before her, Chloe Grace Moretz is a good actress, but she's not Carrie. For a start, she is too pretty. Even at the beginning, with her hair scraped back, she is not an outsider. Sissy Spacek, while attractive in a strange way, also had an eerie quality to her which made it apparent why kids would pick on her. I believe in the original, the taunting kid on the bike calls her "creepy Carrie", where in this, it's "crazy Carrie". It is an important difference for this character. Ditto to the prom scene -Chloe is beautiful. The popular kids would have been all over her as one of them. This is so - so until the end. I didn't love it, and it felt unnecessary, but I could appreciate the effort of the cast to make this work. Until the end, where this makes the same mistake the previous remake made. Evil, vengeful Carrie stomping round with lots of violence and fire. I never got that the original Carrie was doing it on purpose. Or not to the point this one was. And don't even start me on Carrie's final words to Sue. Why the hell was that twist even in it? I also could have done without the modernising - Carrie has no place on You Tube. Honestly this story worked better in the 70's and if people are too dumb to want to watch an older movie, their loss.