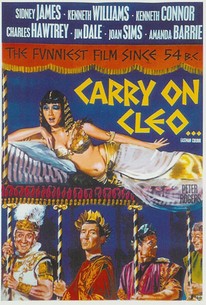 The multi-million dollar film extravaganza Cleopatra was too convenient a target for Britain's "Carry On" funsters to ignore. The plot of Carry On Cleo, if one can discern a plot amidst the sight gags and outrageous puns, involves the attempts by a bungling slave (Kenneth Connor) to rescue Julius Caesar (Kenneth Williams) from assassination. Instigators of the plot are Cleopatra (Amanda Barrie) and Mark Anthony (Sidney James), who comport themselves like a couple of Liverpool pub owners. The best bit involves Mark Anthony's "beheading" of the legendary asp. Filmed on a tight 160,000 pound budget and utilizing leftover sets from the Taylor/Burton epic, Carry On Cleo's reputation rests chiefly on a legal brouhaha involving its advertising artwork, which was deliberately patterned after the ads for the "real" Cleopatra.

E.V.H. Emmett
as Narrator
View All

the emphasis is on school-boy humour, but doesn't dive into smut in the way that the 1970's films do...

Even with such an unrelenting onslaught of absurdities, few are memorable or inspire genuine belly-laughs.

Most of the players have their moments, although these are perhaps too few for some old stalwarts like Joan Sims. Amanda Barrie, however, as a comically suburban Cleo makes a worthy addition to the team.

A good Carry on film set during the Roman empire.

Probably the best of the Carry On's, this sends up swords and sandal/biblical epics with aplomb, complete with the usual "ooh, no missus" innuendo and daft slapstick. Good clean fun.