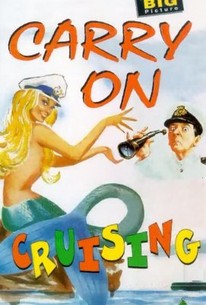 A familiar cast and crew -- which will continue carrying on for several more of these comedies by director Gerald Thomas -- once again star in well-established character types. This time around, the put-upon captain of a cruise ship (Sidney James) has five top positions suddenly needing to be filled by replacements, and unfortunately, he gets a rather inept lot. The quintet does not lack for trying, but then that attitude engenders the difficulties in the first place. The new and amateur cook, the sophisticated bartender, and the shapely femme fatale all make their appearance among the eccentrics on board. ~ Eleanor Mannikka, Rovi

Critic Reviews for Carry on Cruising

There are no critic reviews yet for Carry on Cruising. Keep checking Rotten Tomatoes for updates!

Audience Reviews for Carry on Cruising

One of my favourite carry on films very funny not as silly, very good.

A funny Carry on film set aboard a cruise ship.

Its not anywhere near their best outing but its still a carry on. You gotta watch it.

More formulaic fun, this time aboard ship. A little more subtle than most, but it's hardly Noel Coward.