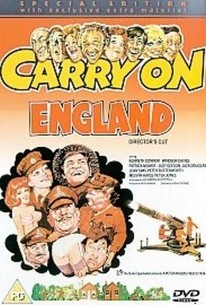 The long-running series of British "Carry On" comedies was nearing the end of the line when this 28th film in the cycle was released in 1976. Set in World War II, Carry On England explores what happens when the British military decides to set up an experimental mixed-gender anti-aircraft battery. While commanding officer Captain Melly (Kenneth Connor) is a stickler for military discipline, it soon becomes obvious that the interaction of male and female soldiers doesn't lend itself to a crack fighting unit, though it makes for plenty of broad physical comedy, especially with Major Bloomer (Windsor Davies), Melly's second-in-command, on deck. Judy Geeson, Patrick Mower, Jack Douglas, and Joan Sims lead the supporting cast. This feature was followed by That's Carry On (1977), a "greatest hits" collection of highlights from the series, and Carry On Emmanuelle (1978), which marked the end of the series until 1992's Carry On Columbus. ~ Sandra Brennan, Rovi

Barbara Rosenblat
as ATS
View All

Critic Reviews for Carry on England

There are no critic reviews yet for Carry on England. Keep checking Rotten Tomatoes for updates!

There are no featured reviews for Carry on England at this time.