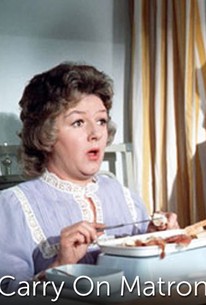 The last of four "medical" entries in the Carry On series is also the lewdest; whether it's the funniest is a matter of taste (taste?) The action takes places at Finisham Maternity Hospital. If you liked that "Finisham" gag, you'll adore such characters as Susan Ball, Miss Willing, and Mrs. Putzova. Oh, yes, we must have a plot somewhere. It seems that a group of thieves hope to steal a huge shipment of contraceptives from the hospital. Alas and alack for them, Matron (Hattie Jacques) and head doctor Sir Bernard Cutting (Kenneth Williams) remain forever underfoot. Other stalwart Carry On-ers in the cast, many in surprisingly fleeting roles, include Kevin Connor, Joan Sims and Barbara Windsor.

Charles Hawtrey
as Dr. Francis A.

Critic Reviews for Carry on Matron

There are no critic reviews yet for Carry on Matron. Keep checking Rotten Tomatoes for updates!

Audience Reviews for Carry on Matron

love them all classics

Quite funny at times.

Its a Carry on. Its bawdy and superb.

The usual innuendo and slapstick, complete with Robin Askwith in a dress. Pretty indistinguishable from some of the others, but fans will love it.