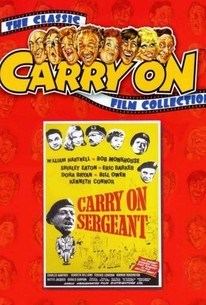 This first entry in the long-running (some would say interminable) British "Carry On" series is at base a collection of motheaten army jokes, albeit served up with freshness and energy. Future Doctor Who star William Hartnell plays Sergeant Major Grimshaw, whose fondest wish is to win the coveted Best Troop Award before his retirement. Alas, this may never come to pass: his newest batch of conscripts include some of the biggest and stupidest foul-ups in military history. Popular comedian-cartoonist Bob Monkhouse and cockney bombshell Shirley Eaton head up the supporting cast, which includes such "Carry On" stalwarts-to-be as Kenneth Connor, Charles Hawtrey and Kenneth Williams. Carry On Sergeant was very loosely based on The Bull Boys, a novel by R. F. Delderfield.

Critic Reviews for Carry On Sergeant

An army-camp farce from Britain. It offers two or three genuinely satirical moments in the midst of a welter of tired musichall slapstick.

The professional skill of William Hartnell and Dora Bryan lends some reality and humour to this conventional farce, in which all the characters come from stock.

Audience Reviews for Carry On Sergeant

I cant say I didnt love it cause I did. I am a sucker for Carry on films...Not one of the best but still.

One of the earliest entries, most of the team haven't joined yet, but this is a hugely influential farce; the formula has been copied countless times in every bootcamp comedy ever since, including Stripes, Private Benjamin and Police Academy.