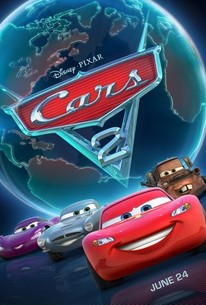 Critics Consensus: Cars 2 is as visually appealing as any other Pixar production, but all that dazzle can't disguise the rusty storytelling under the hood.

Critics Consensus: Cars 2 is as visually appealing as any other Pixar production, but all that dazzle can't disguise the rusty storytelling under the hood.

Critic Consensus: Cars 2 is as visually appealing as any other Pixar production, but all that dazzle can't disguise the rusty storytelling under the hood.

Star racecar Lightning McQueen (Owen Wilson) and the incomparable tow truck Mater (Larry the Cable Guy) take their friendship to exciting new places in Cars 2 when they head overseas to compete in the first-ever World Grand Prix to determine the world's fastest car. But the road to the championship is filled with plenty of potholes, detours and hilarious surprises when Mater gets caught up in an intriguing adventure of his own: international espionage. Mater finds himself torn between assisting Lightning McQueen in the high-profile race and towing the line in a top-secret mission orchestrated by master British super spy Finn McMissile (Michael Caine) and the stunning spy-in-training Holley Shiftwell (Emily Mortimer). -- (C) Disney

Vanessa Redgrave
as The Queen/Mama Topolino

Larry The Cable Guy
as Mater
View All

All Pixar Movies Ranked From Best to Worst
Poll: Which Pixar Sequel Would You Like to See Next?
Box Office Guru Wrapup: Cars 2 Finishes First

The trouble with stuffing too much into a film quickly becomes evident in Cars 2, as the plotlines tumble and collide with each other creating, mostly, cacophony.

Don't tell the kids, but Santa Claus isn't real and Pixar is fallible.

It is all quite jolly and fast-paced, a feast for the eyes, but there's not much for the mind or the heart.

The invention here is often still dazzling, the race sequences are invigorating and spirited voice work atones for the inexpressiveness of the cars themselves. Even so, this isn't Pixar at top gear.

It's all the delight of a spy movie, but with the added fact of Oh right, they're all cars!

This sequel wisely alters course - in the most extreme direction imaginable - to spoof spy thrillers.

The problem with Cars 2 isn't that it's a bad film. It's that it's not a Pixar film.

Start your engines! You're in for the adventure of your life with Cars 2.

Yes, the movie has some weak spots. A little long, a little light on story, and, gratefully, heavy on visuals...but I say, with Pixar, do we always need missing parents and tearjerking, with tissues always an arm's reach away?

I defy anyone to tell me with a straight face that this is anywhere near as awful as 2011's other family hits, Zookeeper and Mr. Popper's Penguins. Case closed.

Well Pixar has done it again. Cars 2 may not be the best Pixar has done , it is still fun to watch. Many new voice actors were brought in for this movie, Eddie Izzard, Jeff Gordon, Michael Caine, Jeff Garlin, Bruce Campbell and many others, my favorite was Michael Caine. Caine is good in most things, and this spy character he pulls off perfectly. AS with most Pixar movies the animation is top notch, and the final 25 minutes are great amounts of CG. The film does start out kind of stupid but it then gets really entertaining. My only gripe i have about the movie, is how it differs a lot from the firstr film, the first film was a racing movie and very heartwarming, this one is more of an action movie and spy movie than a racing movie, plus the plot is all over the place. But the comedy is still spot on with this movie, it still has all the original characters as the original, Mater, Sally, Flo, Ramone, Sarge, Filmore, Guido, Luigi, the only one not there is Doc Hudson. Now i was wondering how they were going to do Doc for the movie, if they were going to kill him off, or if they were going to get another voice actor for him like they did for Slinky in the new Toy Story. Speaking of Toy Story there is a fantastic short film before the movie that is about all the Toy Story 3 characters having a hawaian vacation. if you are looking for a fun and entertaining animated film definitely check this out. 3/0* out of 5 Review originally written 6/25/2011

Cars 2 is the worst film that Pixar has ever made and will probably ever make, plain and simple. I usually use the word arguably when making statements like that, but this film has been collectively know by fans of even the first Cars film to be the weakest. Personally, upon revisiting this instalment, I can't see an argument as to why this film even received the green light. Yes, the merchandising for the original went through the roof, but in terms of Pixar's incredible storytelling, Cars 2 should've been a much stronger film than it is. Kids may find a few scenes of pure enjoyment throughout this film, but I can only see that being from the spectacle. The premise of this film is thrown together just to make a quick buck at the box office and the end result painfully represents that. I'm not trying to compare Cars to Star Wars, but this film is honestly as if they took a character like Jar Jar Binks and made him the front and centre storyline. No, Mater is not as annoying, but too much of him becomes a desperate venture for laughs. The premise of this film should've been as simple as Lightning, Mater, and their crew travelling to the World Grand Prix to compete for a new title, but instead this film devolves into an espionage mishmash of unfunny comedy and dumb slapstick. I'm a pretty big fan of the first film for the most part, but this is the complete opposite direction from what was presented in the original. The sad part is that the spy aspect about this film is tedious and doesn't even remotely intrigue the mature viewers. This may seem like more of a rant than a review throughout my next statement, but I mean every word. The most interesting aspect about the first film was the character of Doc. Hudson, but he is completely thrown out of the picture here, leaving the most interesting portion to obviously be on Lightning McQueen, who is now turned into a side character in order to give Mater the spotlight. Not only that, but giving him an even dumber role into tricking him into be thought of as a spy, only to eventually give the lesson of true friendship in the end of the film. The pacing of this film is all over the place and the message throughout the final act has been done better in much stronger children's films. For this reason, Cars 2 warrants no replay value, unless you are a very young kid. When it comes to animation, Pixar is usually the best in the business. Cars 2 is absolutely no exception to that notion, being one of their most beautifully animated films to date. It's too bad that this animation is wasted on a poor film, but nevertheless, the loads of action and cool race sequences do make this movie a little easier to handle. If it wasn't for that aspect, this film would honestly make my list of worst animated films of all time, which is a very narrow list to begin with. The main mistake this film made was being made for the sole purpose that the original sold a lot of toys. There is no way the story of this film was conjured up by the creators of the first, before the overwhelming pop culture sensation it became. Each time I revisit or frankly think about this movie, the less I like it. I thought it was fine upon first viewing it in the theatre, but that was solely due to my thorough enjoyment of its predecessor. Cars 2 is sadly a pretty bad movie with some amazing animation and well-done action sequences. There was absolutely no reason this film had to happen, and that is very apparent in the final product. The face of Cars has always been Lightning McQueen, so making the side characters a much more prevalent plot was a horrible decision from the get-go. I can see how some kids will have fun watching this movie, but what I can't see is someone over the age of ten calling this a genuinely good movie. For kids it's okay at best, but even then I would just be inclined to repeatedly show them the original over this film any day. Aside from Cars 2, Pixar's track record is fantastic, as none of their films have been less than at least solid in my eyes, but Cars 2 is a straight up poor movie.

Full of car action but not as funny or charming as the first part. The spy story is surprisingly complex, way too complex for kids. Of course the fast pace and fun characters make up for that, giving the younger audience an adventure to remember.

First pretty sure the 3d was useless. Really not needed. Second this is Pixar and the movie looked amazing. Nothing short of stunning. The problem with Cars 2 is it really is the mater show. My daughter liked the entire movie. But to me it was James Bond with mater. Unfortunately for me Larry the Cable Guy is not my cup of tea and his humor ratcheted it up to be every minute of the show was a bit much to me. The good parts of Cars 2 is that everyone else does actually do well in their parts and makes it worth while. By far not the best Pixar movie but far from horrible. My daughter enjoyed the whole thing from beginning to end and was extremely happy.