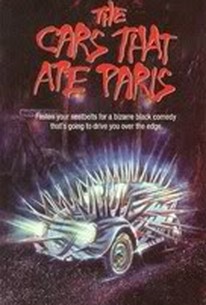 The Cars That Ate Paris Photos

This first effort from acclaimed writer/director Peter Weir is set in the secluded rural town of Paris, Australia, where the chief source of income is provided by the orchestration of automobile accidents -- which frequently claim the lives of passing tourists, though those who survive are usually subjected to bizarre brain experiments by a loony local surgeon. One such unfortunate survivor is young Arthur, who remains in Paris after his recovery to work in the hospital, unaware (at first) of the circumstances which brought him there. Although there are many amusingly weird moments, this black comedy is a bit too deadpan for its own good and may be too talky and meandering for horror fans. A condensed version was released in the U.S. under the title The Cars That Eat People. ~ Cavett Binion, Rovi

Critic Reviews for The Cars That Ate Paris

The Cars That Ate Paris is both part of that and a carnivalesque reflection of it. It's a complicated satire and a violent and eccentric classic.

It resists rational explanation and has a lot of first-filmish lapses, but the mix of black humour and J.G. Ballardian kink is very distinctive.

The whole thing is played too broadly, but home-improvement victims will appreciate the unending weeks it takes for a simple bathroom to be converted into a piece of avant-garde sculpture.

The tone is beautifully sustained throughout, hovering just on the right side of conviction, with superbly understated comic performances from Camilleri and Meillon (the latter as a cosmically impotent mayor).

The Cars That Ate Paris is a strange affair. It's a dark comedy and it's satirical, but it's also quite, quite insane.

At the end of the story the young men rebel against discipline and use the stock cars to attack and destroy many of the wooden buildings in the town. I looked for symbolism here and failed to find it.

Establishes many of the themes that he would revisit later in his career; it especially resembles The Truman Show in many ways.

As a low-budget first film, director Peter Weir could've done worse, but I'm thankful that his career continued in a very different direction than this film would suggest.

It's not frightening, funny or even very thoughtful, more an offbeat curiosity than a particular sign of Weir's career to come.

Audience Reviews for The Cars That Ate Paris

First off, this is Paris: Australia, not Paris: France. It's a charming little horror debut from Peter Weir that sits somewhere between Clockwork Orange and The Wicker Man. It is dated and would now be worth remaking, but for fans of Weir it's wonderful to see his early work.

I found this movie confusing, slow, boring, and very strange. I wasn't sure if anything was actually going on. I wouldn't recommend seeing this movie.

Horror movie genre that involves killing machines specially cars are mostly bad ideas to start with. This is an early film of director Peter Weir (Gallipoli). The plot is very laughable and the special effect is not even up to the standard of the 70's. What made this movie really shine though is the film quality and the music scores. The music in this film really stood out and definitely is worth listening while laughing your way through this cheesy, evil car film.

The Cars That Ate Paris Quotes