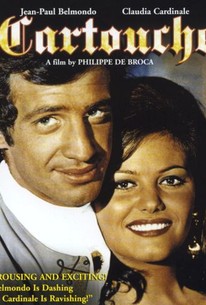 Jean-Paul Belmondo romps his way through the role of 18th century French bandit chief Cartouche. At first robbing from everyone in sight (he has to -- he's head man of a Parisian crime syndicate) Cartouche is rechanneled into becoming a Gallic Robin Hood by beauteous gypsy Venus (Claudia Cardinale). In Highwayman fashion, Venus eventually sacrifices her own life to save Cartouche from harm. He vows to continue his activities to avenge her death, but still manages to have a riproaring good time doing so. Hilarious without being condescending, Cartouche was reissued under the completely inappropriate title Swords of Blood.

Pierre Repp
as The Marquis of Griff

A young Claudia Cardinale plays Vénus with great energy and wit. But it's Belmondo who the camera has the greatest love affair with. The charismatic and sexy actor commands the screen.

There are no featured reviews for Cartouche at this time.