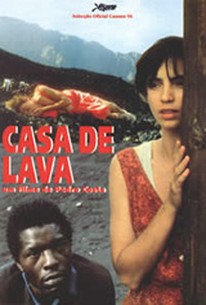 This rather esoteric Portuguese-French drama is filled with poetic imagery. It is notable for it's beautiful photography as it follows a devoted nurse from her Portuguese home to the strange Cape Verde islands. Mariana is the nurse assigned to care for the injured immigrant worker Leao who is in a coma. With him she returns to his Cape Verde village. She was dissatisfied with her currently depressing life and willingly went. She begins to feel almost claustrophobic in the grim environment as she encounters a series of disturbing characters who drag her deeper into their depressing and hopeless lives. Mariana begins to reevaluate her former life. ~ Sandra Brennan, Rovi

There are no featured audience reviews yet. Click the link below to see what others say about Casa de Lava!