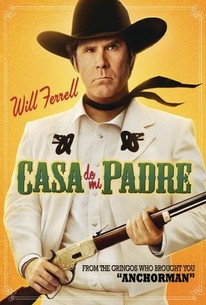 Critics Consensus: Thinly written and not as funny as it needs to be, Casa de mi Padre would have worked better as a fake trailer or short film; stretched to feature length, it wears out its welcome far too quickly.

Critics Consensus: Thinly written and not as funny as it needs to be, Casa de mi Padre would have worked better as a fake trailer or short film; stretched to feature length, it wears out its welcome far too quickly.

Critic Consensus: Thinly written and not as funny as it needs to be, Casa de mi Padre would have worked better as a fake trailer or short film; stretched to feature length, it wears out its welcome far too quickly.

Armando Alvarez (Will Ferrell) has lived and worked on his father's ranch in Mexico his entire life. As the ranch encounters financial difficulties, Armando's younger brother Raul (Diego Luna) shows up with his new fiancée, Sonia (Genesis Rodriguez). It seems that Raul's success as an international businessman means the ranch's troubles are over as he pledges to settle all debts his father has incurred. But when Armando falls for Sonia, and Raul's business dealings turn out to be less than legit, all hell breaks loose as they find themselves in a war with Mexico's most feared drug lord, the mighty Onza (Gael Garcia Bernal). -- (C) Pantelion Films

Will Ferrell
as Armando

Dan Haggerty
as Himself

It's all a little undercooked, playing more like an extended version of a very funny trailer than an actual, full-bodied comedy.

It's a one-joke film and that's the joke.

It takes a funny, fresh little skit and tries to stretch it out to a feature length movie.

While this film isn't quite a home run, it's a bold experiment in cinema.

Casa De Mi Padre is a witty and fun comedy and is totally worth going to see. Even if you don't like reading subtitles you should make an exception and check this out.

Ultimately, this is not enough comedic merit to fulfil the 85 minutes running time.

Whilst this comic experiment certainly stands head and shoulders above some of Ferrell's more mediocre projects, it still feels a million miles away from the pinnacle which was Anchorman.

Ferrell is funny, as usual, and plays off surprisingly well against Bernal and Luna, who are frequent collaborators in more than one language.

Will Ferrell talking Spanish in a full non-English language movie?! I need see this!

Not clever. Not funny. Just Will Farrell, as usual.

This Spanish language film, parodying Mexican telenovelas and westerns, is infamous for the simple reason that Will Ferrell plays the lead, having known no to little Spanish before filming. Not only is it a triumph for the simple reason that Ferrell lands every bit of accented dialogue, but it does as advertised, and that is to parody. Even if you are not acquainted with what exactly this film is pointing to for its laughs, the inspiration is adamantly represented in every scene. There are a couple of moments that make you chuckle, maybe a guffaw, but those are not directed at the source material. Most times the laughs come from moments of absurdity, quirkiness, and strangeness. What becomes much more interesting when watching the film is not the humor, but oftentimes the performance from Will Ferrell. Ferrell hasn't been taxed with giving a serious performance since his indie turn in "Everything Must Go" and strangely enough he gives yet another earnest performance here. Sometimes the dialogue gets grounded in the character's slow wit or some dumb one off joke, but clearly he has a passion and energy to the role that is very refreshing. If he is trying to parody a Mexican western, than he has done an outstanding job playing the underestimated cowboy, to a tee. Now, his involvement isn't actually necessary to the film, since his true ethnicity is never mentioned or made fun of. Maybe that's what makes his performance that much more interesting, since it isn't one of callous irresponsibility, showing a doofus in a saddle. There are many instances of strange set pieces, cheap animal effects, and even a apology from the second director in the midst of the film, which is probably the closest thing to an ode to "Monty Python and the Holy Grail" that I've ever seen. Though it wasn't funny in the regular Ferrell fashion there is something absurdly humorous about this, so at least I can defend it against those who don't see why it does elicit a chuckle here and there.

Armando Alvarez: My woman, Miss Lopez, must love the land as I do. "Funniest movie you'll ever read." Casa de mi Padre is a weird, eccentric, and messy film. I don't know exactly what the goal with this movie was. Was it to make us laugh? Because it doesn't seem like that's the intention. Sure there's some funny scenes, but this isn't what I'd call a laugh riot. Was it to entertain? I can't see too many people, especially the target audience for a Will Farrell movie, calling this movie entertaining. In other words, this movie exists, but for what reason, I have no idea. All in all though, it really wasn't that bad. Armando Alvarez is a rancher on his fathers ranch. He is also the son who isn't well liked by his father because of a past accident(think Dewey Cox). His father is always calling him stupid and doesn't have much faith in Armando as a man. On the other hand, he loves his second son very much. It just so happens that he is a drug dealer, who has just entered the biggest dealers territory. Now there will have to be some sort of drug war. As far as the movie is concerned; it's ridiculous. Stuffed animals, crappy 1930's landscape backdrops, and Will Farrell speaking Spanish the whole film. Still the movie has weird sense of likability coming from it. I didn't mind the movie, and I would actually say I even enjoyed it to a degree. Not enough to make me recommend this to anyone, but enough to say the short little hour and twenty minute running time wasn't a complete waste. I would have to be led to believe that most people wouldn't like this film. I would also be led to believe that a good percentage of people would probably turn the film off before the twenty minute mark. As for me, it wasn't a hard movie to get through. It bores at times, and it meanders at times, but all in all it's hardly the worst thing ever.