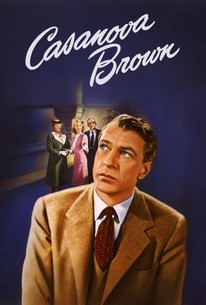 When he finds out his ex-wife has just had his child and plans to give her up for adoption, a timid English instructor dashes to the child's rescue and attempts to care for her in a hotel room. Before too long, however, his new fiancee and his ex confront him and he must decide what he will do. This light comedy starring Gary Cooper, Theresa Wright and Anita Louise garnered Oscar nominations for Sound and Art Direction and was previously filmed under the title Little Accident in 1930 and 1939.

Jack Gargan
as Intern
View All

On the whole, without managing to be a great comedy, Producer Johnson's picture will make the Cooper following happy at the chance to see the lanky one playing again what looks like the typical American small-town guy.

Cooper gives a charming performance as the timid teacher caught between two women, ex-wife and fiancee, but the fun resides in watching the macho star hold, feed, and raise a baby (long before Three Men and Cradle)

There are no featured audience reviews yet. Click the link below to see what others say about Casanova Brown!