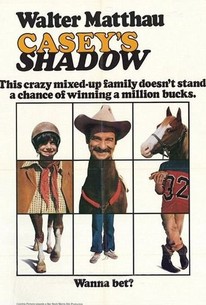 Cajun quarter-horse trainer Lloyd Bourdelle (Walter Matthau) struggles to eke out a decent living for himself and his three sons Buddy, Randy and Casey (Andrew A. Rubin, Stephen Burns and Michael Hershewe). Their prize horse is thoroughbred foal Casey's Shadow, named after the youngest son (Hershewe). The question is whether or not Lloyd, a life-long loser, can take advantage of the opportunity for bettering his lot afforded by Casey's Shadow. Alexis Smith co-stars as Sarah Blue, a wealthy woman who becomes Matthau's strongest ally when she offers to buy the horse rather than allow the vindictive Mike Marsh (Robert Webber) to destroy it.

Andrew A. Rubin
as Buddy Bourdelle

Seems a shame to keep slagging off Ritt for his liberalism when he can turn in something as well-crafted and unpretentious as this.

It is so decently tempered and its principal characters so surprising at important moments that, in the world of horse movies it seems rare indeed.

Matthau and the young actors playing his sons are wonderful and Alexis Smith manages to imbue her role of Sarah Blue with elegance, intelligence and warmth.

A complex tale of morals and animal cruelty.

Walter Matthau bites into his juicy role like a cowpoke chewing on some tobacco and it comes out just right.

Beautifully observed, but a little too worthy and horsey for those who like their films with more bite.

There are no featured audience reviews yet. Click the link below to see what others say about Casey's Shadow!