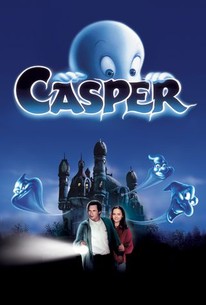 Based on the popular cartoon character, this family-oriented "ghost story" is about a not-so-scary spirit who bonds with a little girl (Christina Ricci). The eternally irritable Ms. Carrigan (Cathy Moriarty) discovers that the only thing she's been left in her recently departed father's will is a rickety old house in New England. Naturally, the woman is furious about this, until her "close personal friend" and assistant, Dibbs (Eric Idle of Monty Python fame), discovers a secret message that a treasure may be concealed somewhere in the house. The two take off for Maine, only to learn that the house is haunted by Casper "the friendly ghost" and his three ghostly uncles Stinky, Stretch, and Fatso. After futilely recruiting an exorcist (Don Novello, more or less reviving his Father Guido Sarducci character from Saturday Night Live) and a "professional ghost exterminator" (Dan Aykroyd), she brings in a "ghost psychiatrist" (Bill Pullman) and his daughter Kat (Ricci). Innocently attracted to the young girl, Casper befriends Kat as they try to save the ghosts' home from the evil Carrigan. Eye-popping special effects highlight this magical story that touches (albeit lightly) on the theme of what lies at the heart of human desires. Clint Eastwood, Rodney Dangerfield, Mel Gibson and The Crypt Keeper (of Tales from the Crypt) all make cameos as apparitions in the mirror Bill Pullman looks into in the house. ~ Don Kaye, Rovi

Rodney Dangerfield
as Himself (uncredited)

Ernestine Mercer
as Woman Being Interviewed

Devon Sawa
as Casper in Person

Clint Eastwood
as Himself (uncredited)

Mel Gibson
as Himself (uncredited)
View All

It's a funny and often poignant film that's worth reexamining today.

t's aimed squarely at the tinies, but there is charm enough here to make it bearable for adults too.

A fairy tale with the soul of a rerun.

It's not clear why Steven Spielberg's Amblin decided to make a live-action entertainment starring the least interesting and most saccharine of all 50s cartoon characters.

Once the audience has become inured to the wide-eyed protagonist and impressive digitized effects, there's little sense of wonder or awe to be found.

The set design, however, merely disguises what is in fact an intimate and likeable picture.

More like a Cinderella story than a gothic horror, this really was one of the most under-rated movies of the 1990s and should keep viewers of all ages engrossed on a slow summer holiday day.

...an erratic but generally passable adaptation that could've easily been much, much worse.

It's a perfect kids movie

This movie was so important to me

All these years later, Casper has managed to stick around thanks to it offering a pleasant blend of what audiences expect from a kids movie and some weightier thematic fare.

Brad Silberling has done a lot of directing for various TV episodes and such, but he does also direct movies. In this case, he brings the story of Casper to life in an impressive way. This is one fun film from start to finish.

There isn't much to the story, especially in the first half, but this is where it is the most fun. The nicely thought out dialogue and the funny antics of the ghostly trio, Stretch, Stinkie, and Fatso, all keep this picture highly entertaining. The second half of this 100 minute film slows down just a bit to get more story going. At this point the ghostly trio are a little less involved and Casper takes the stage.

The CG is outstanding. I know the ghosts look all cartoony, but this is a childish film. Anyhow, they look great. The voice acting is also spot on. Joe Nipote, Joe Alaskey, and Brad Garrett match wonderfully to their ghost characters. Malachi Pearson is also a solid Casper.

All the actors for the human characters are magnificently cast as well. Christina Ricci and Bill Pullman portray a nice father daughter relationship. Cathy Moriarty matches as the evil Carrigan Crittenden and who better than Eric Idle to play her goofy comedic sidekick. There are also a ton of enjoyable cameos in this movie, including Dan Aykroyd as the Ghostbuster Raymond Stantz.

Casper is truly one fun family film, except for a couple occasions where the "B" word comes out of somebody's mouth. Watch this if the opportunity arises.

I recall this film popping out of nowhere really, saw a trailer for it out of the blue, liked the look of it and went to see it. The creepy Addams Family visuals along with some really sweet looking effects hooked me and overall I really enjoyed this little kiddie flick. The plot is a simple Scooby Doo type affair really. There's a big old spooky mansion where Casper and his three uncle ghosts reside. An evil tyrannical female inherits the mansion and wants to find the treasure hidden within its bowels (then tear it down), problem is the ghosts. So she hires Bill Pullman (a paranormal therapist) and his daughter Ricci to get rid of the spooks. This being a kids flick its very predictable so I needn't tell you how things unfold. What I will say is the film is a highly enjoyable ghostie adventure with some really nice looking cobweb ridden sets, charming locations, quirky humour, acceptable performances and great CGI amazingly. The ghost effects on Casper are really nice and hold up well today. He's easily the best of the bunch visually, he looks quite realistic actually. The three naughty uncles are slightly more cartoonish looking and act so. The jokes and slapstick from them is very childish, you can see the one liners and sight gags coming a mile off but that's expected. Other ghosts that materialise during the film also look more like cartoons and not as effective as Casper, not too sure why Pullman's wife appears as a proper human though when all the others are CGI, emotional moment I guess. The other thing that impresses is how well the actors interact with the CGI spooks, believe it or not but they do look in all the right places and at the right times. You'd half expect this film to have hokey effects and badly directed live action but its really good all the way through. There are some unnecessary quickfire cameos that's for sure, the only clever one was seeing Dan Aykroyd turn up as 'Ray Stantz', I liked that. Hot on the heels of a certain Charles Addams creation Ricci follows on with her adopted kooky persona with this halloween caper, and its suits her perfectly. Pullman is a blundering but lovable father to Ricci's character whilst Casper is voiced nicely and acted well by a young Devon Sawa in human form. The only let down is the rather lame villainess and her henchman played by Eric Idle who didn't really need to be here. At times this film is actually very sweet and can bring a lump to your throat, it has that sickly sentimental touch, especially during the finale. But overall this is a great fun film if you enjoy light-hearted supernatural silliness. To sum up it isn't too far from a kids version of 'Beetlejuice' or 'High Spirits' and much better than the Eddie Murphy vehicle 'The Haunted Mansion'.

Considering I've never been a HUGE fan of Casper (then again who is these days?) and considering the film doesn't have the best reputation for an animated adaptation, I wasn't expecting a whole lot, but I was surprised at how good I thought the film was. Bill Pullman and Christina Ricci both do decent jobs and you can sense the relationship of father and daughter with the two, and the kid who played CAsper does a good job at pulling off his personality, but the characters that steal the show are the ghostly trio, Stretch played by Joe Nipote, Stinky played by Veteran VA Joe Alaskey (Bugs, Daffy, Tweety, & Sylvester from 2000 to 2006), and Fatso played by Everybody Loves Raymond actor Brad Garrett. Not only are all three of these guys entertaining as hell as these characters, but they make them each funny, give them distinct voices, and make each character just mean but the likable and funny kind of mean. Also the film has a few very good cameo moments and does have a good sense of humor which considering most Cartoon to film adaptations usually have the same humor of juvenile fart jokes or other jokes, but no this film did try a number of jokes and a lot of them actually work

[img]http://images.rottentomatoes.com/images/user/icons/icon14.gif[/img] Adults should definetely avoid this film, it's often overly dramatic but thankfully never in an annoying manner. It's a light hearted family movie that will entertain the primary audience whilst serving up brilliant performances both live action and voice, particularly Christina Ricci.