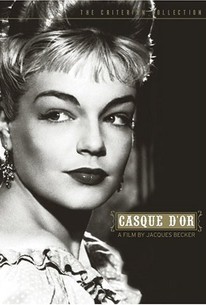 The Paris demimonde of 1900 is the setting for Casque d'Or. Georges Manda (Serge Reggiani), an honest woodworker, falls in love with Marie (Simone Signoret), the "moll" of minor crook Roland (William Sabatier). Gangster boss Felix Leca (Claude Dauphin) orders Georges and Roland to fight a duel to the death over the girl, as prescribed by the "code of the apache." Felix then pins the blame for Roland's death on Georges' boyhood chum, Raymond (Raymond Bussières), knowing that the woodworker will nobly accept the blame; this will leave Marie alone, which is what the lustful Felix has wanted all along. When Georges learns he's been set up as a dupe, he escapes from the police and kills Felix. Casque D'Or was based on the true-life Leca-Manda scandal, wherein an otherwise decent man was guillotined for shooting down a gangster boss in broad daylight. Since the scandal was common knowledge in France, the downbeat ending of this film was hardly unexpected but still extremely moving. Completed in 1951, Casque D'Or was a failure on its first release but then built up an excellent word-of-mouth reputation abroad. The film was released in the U.S. in 1956 as Golden Marie.

The favorite role of star Simone Signoret this is a bravura period romance costarring Serge Reggiani that masterfully interweaves love, violence and fate in turn-of-the-century Paris.

An excellent recreation of a colorful French period.

An insular underworld drama of love and revenge vibrates authentically against a vividly etched background of early century Paris.

One of the great movie romances.

[VIDEO ESSAY] Draped in the manners of fin de siècle in Paris, writer-director Jacques Becker's 1952 milestone of romantic drama is a snapshot of French social mores at the turn of the 20th century.

One of the great films of French cinema.

Tough, lyrical, and one the screen's great romantic tragedies.

Most movies would ramp up the adrenaline to show the suspense-oriented ending, but Becker would rather emphasize the feelings behind these events. He shows Marie's face for long, potent moments, and that's all the drama he needs.

Becker turns what could've been a routine gangster flick into a minor gem with revealing camera work and smart twists.

It's Signoret's show, though, and she steals it with aplomb: beautiful and graceful she often puts in stunning performances, but few are as memorably captivating as this one.

simone signoret causes a whole lotta trouble but she's down for her man. the second impressive becker crime film i've seen. based on a true story, with old fashioned tragic romance that's not sappy and wonderful evocation of the demimonde in la belle époque